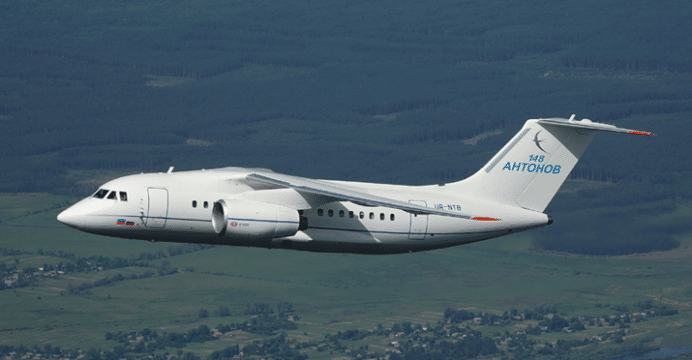 Ukrainian aircraft manufacturer Antonov (a division of Ukroboronprom) reportedly unveiled an airborne early warning and control (AEW&C) version of the An-148 airliner.

According to the source of the news, Defence Blog, the An-148 AEW&C – designated the An-148DRLV – will have an active electronically-scanned array (AESA) radar with an instrumented range of 400 km and detection range of 350 km against fighter-sized targets. The AESA radar will have 360-degree coverage, over-the-horizon-targeting as well as altitude coverage of up to 25 km.

The An-148 can carry up to 85 passengers. It is powered by two Progress D436-148 turbofan engines, which provide a top speed of 870 km/h and ferry range of up to 4,400 km (with 75 passengers). The An-148 is equipped with a fly-by-wire flight control system with full-authority digital engine control (FADEC) system for its D436 turbofans. Thus far, most An-148s have been bought by entities in Russia.

Ukraine has developed phased-array radars in recent years, such as the 80K6-series. These are ground-based phased-array radars for air surveillance and air defence roles. The 80K6’s developer, Iskra, stated that it was eager to develop active phased-array – i.e. AESA – radars, and the 80K6T is an example of this effort. Thus, a domestic system should not be ruled out, though it would be a significant feat.

However, Antonov could also have overseas options to develop the An-148DRLV. The China Electronics Technology Group (CETC) ZDK06 – likely the export variant of the KJ-200 – could be a plausible candidate.

Ukroboronprom has been building ties with the Chinese defence industry, even to the extent of conferring manufacturing licenses for Motor Sich’s turboshaft and turbofan engines to the Beijing Skyrizon Aviation Industry Investment Co. Ltd. (IHS Jane’s). There is certainly a foundation for trade, one that could enable Ukroboronprom to pair Chinese electronics and munitions to its own platforms.

Overall, the An-148DRLV is an example of Ukraine’s efforts to bolster its capabilities and to independently source big-ticket items locally. Prior to the An-148DRLV, Ukraine announced that it would develop a new lightweight multi-role fighter centered on Motor Sich’s AI-322F turbofan engine. However, to achieve its goals, Ukraine is working to generate activity – and income – for its defence industry, and partnerships as well as sales to overseas clients (e.g. Pakistan and Saudi Arabia) are a piece in this strategy.