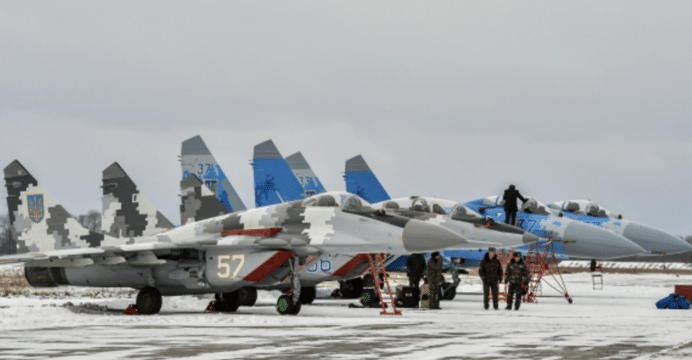 IHS Jane’s reports that preliminary design sketches of the fighter, designated Legkiy Boiviy Litak (LBL) – i.e. “Lightweight Combat Aircraft” – have been produced. Electronic subsystems are expected to be a mix of Western and Ukrainian systems.

Recurring reports have suggested that the LBL would “bear a strong resemblance to the MiG-29.” It is very unlikely that the LBL will be as large as the MiG-29 if it is powered by AI-322F turbofans. Each AI-322F will have an afterburning thrust output of 41.19 kN, two of which would provide the LBL an afterburn thrust-rating of 82.2 kN. The AI-322F has a dry weight of 560 kg and is equipped with a full authority digital engine control (FADEC) system.

The Taiwanese F-CK-1A, which is powered by two Honeywell/ITEC F125-70 turbofans (with comparable thrust-ratings as the AI-322F), could provide an example of the LBL’s physical specifications. The FCK-1A has a ferry range of 1,100 km, top speed of Mach 1.8, and six hardpoints. Like the F-CK-1, the LBL might also see a strong use of composite materials as well as a fully-digital fly-by-wire flight control system.

The LBL may enter a saturated space (with other lightweight fighters), but Ukraine’s incentives to develop the LBL are fuelled by completing its supply-side independence from Russia, modernize its air force, and offer a high-value product for export. In fact, the LBL would round-out Ukraine’s fixed-wing product line, which comprises of the special mission An-132D and tactical transport An-178.

Considering how some of Ukraine’s defense programs rely on partial foreign funding and scale support (see Saudi An-132D program), it will be worth seeing if Kiev charts the LBL along similar lines. A funding and procurement partner would raise the LBL’s chances of succeeding through development. The extent of overseas technical support and sourcing, especially from the U.S. and Western Europea, will also be key considerations. Heavy sourcing, especially of key components (e.g. flight control system) may cut development time, but it could also add to the cost and accessibility (for third-party buyers) of the aircraft.