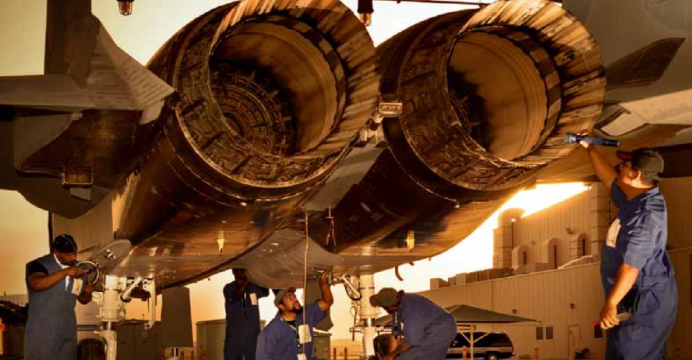 With the official roll-out of the Antonov An-132D and the establishment of a Turkish-Saudi defence joint-venture, steps are being taken to support Saudi Arabia’s defence industry.

In April, Saudi Arabia’s Minister of Defence and Deputy Crown Prince Mohammed ibn Salman announced that the country was aiming to produce at least 50% of its defence procurements internally by 2030.

Through its longstanding partnership with Boeing, Saudi Arabia already engages in domestic maintenance, repair and overhaul (MRO) work for its combat aircraft, such as the Boeing F-15 Eagle (used by the Royal Saudi Arabian Air Force in several variants) and BAE Eurofighter Typhoon.

This work is conducted at Alsalam Aircraft Company, which was established in Saudi Arabia in 1988 as part of an economic offset agreement with Boeing, Saudi Arabia’s main defence and civil aircraft vendor. The Alsalam facility also undertakes MRO work for Saudi Arabia’s helicopters.

Although Alsalam does engage in some manufacturing work (namely of specific parts), Riyadh appears to be intent on manufacturing, or at least co-producing, complete systems.

TAQNIA is among the companies at the center of this effort.

TAQNIA a wide-reaching company, one with a directly accessible investment arm (Riyadh Taqnia Fund), that has emerged as a principal partner for Riyadh and its overseas suppliers on matters relating to local production and other defence industry activities.

The industry group is also at the forefront of broader technology research and development initiatives in Saudi Arabia.

In February, Taqnia Aeronautics signed an agreement of cooperation with the Ukrainian aviation vendor Antonov for the provision of an aircraft manufacturing complex to produce the An-132, a greatly improved and modernized version of the An-32 Cline utility transport aircraft.

This month, Antonov completed the first new-built An-132D in Kiev, with the aircraft now being prepared to enter testing in the coming months.

The An-132D will be powered by the Pratt & Whitney Canada PW-150A turboprop engine equipped with Dowty propellers. It will also be configured with an air management system from Liebherr and avionics from Honeywell.

Taqnia and Antonov believe that up to 80 An-132s could be produced.

Taqnia has also set-up a new defence electronics company in partnership with the Turkish electronics giant Aselsan. This new company, named SADEC, will be involved in marketing and (with orders) producing onboard systems, such as radars, electro-optical systems, and electronic warfare equipment.

Although Saudi Arabia, like its other carbon fuel-rich neighbours, is entering austerity in terms of public expenditure, defence expenditure appears to benefitting from continuity. However, Riyadh will be looking for ways to use defence to placate domestic needs, especially employment and internal investment.

While commercial offsets are not new to Saudi Arabia (see Alsalam), deepening Saudi participation in marquee defence programs is an emerging factor. In fact, Taqnia is also in talks with Lockheed Martin’s Sikorsky to explore the possibility of S-70i Black Hawk utility helicopter manufacturing work.

In what is becoming a repetitive trend in other countries (e.g. in Pakistan, Azerbaijan and the United Arab Emirates), Turkish, Ukrainian, and South African companies are at the forefront of supplying systems, technology transfer, and co-production share to the Saudis. It should not be a surprise to see Saudi Arabia try and extend these works to securing third-party export contracts.

This could potentially generate a glut in available options, at least in areas with comparatively thin entry deltas, such as small arms and light armoured vehicles. If Taqnia’s ambitions come to fruition, then big-ticket products, such as regionally produced transport aircraft and helicopters, could be in supply as well.

The S-70i Black Hawk is an interesting case.

This is already a widely embraced and heavily produced platform, making it among the more affordable options to buy and operate in terms of utility helicopters. But with Turkish Aerospace Industries (TAI) set to completely manufacture this helicopter (with the General Electric T700 turboshaft to be manufactured under license at TUSAŞ Engine Industries), the S-70 will benefit from a regional supplier.

If Taqnia Aeronautics joins, even as a partial parts manufacturer and assembler, then the S-70 would have two centres within the same region. Large nearby prospective customers, such as Afghanistan, could see this emergence as a boon. New markets could even be created.

Distributed supply sources and competitive pricing (coupled with the S-70’s existing scale) could make this a markedly affordable helicopter, one that could see adoption in the immediate region and beyond. TAI and Taqnia each have the incentive (for domestic economic interests) to drive third-party adoption.

Granted, the S-70i is the farthest scenario, but similar trends could be seen in many other areas, such as light armoured vehicles, small arms, small arms accessories, artillery, and munitions.