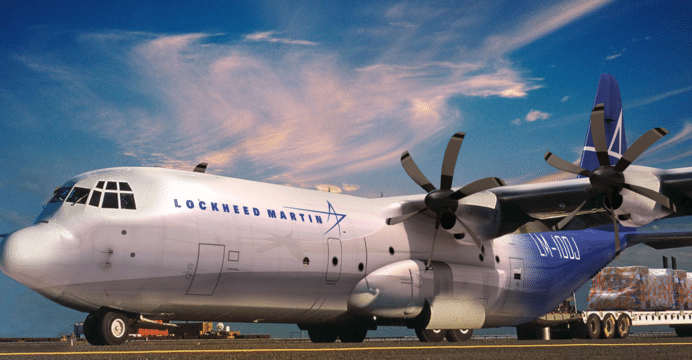 The LM-100J is the successor to the L-100 Hercules, which was manufactured from 1964 to 1992 for civil and commercial applications. Lockheed Martin announced the LM-100J in February 2014.

The Vice President and General Manager of Air Mobility & Maritime Missions at Lockheed Martin, George Shultz, celebrated the roll-out, stating: “Today’s rollout not only marks another accomplishment for Super Hercules, but it also reflects the aircraft’s capability to evolve to meet customer requirements. The LM-100J program has exceeded all expectations in moving from an idea to a reality.”

Lockheed Martin is marketing the LM-100J for many roles such as, among others, transporting cargo, humanitarian relief, VIP transport, aerial fire fighting, medical evacuation, search-and-rescue, and supporting large development programs, such as hydrocarbon exploration.

Although Lockheed Martin’s foremost market would be users operating 100-plus L-100s in service, the prospect of a no-frills Super Hercules variant – i.e. without the C-130J’s defensive suite and military-use capabilities – could be attractive. In fact, the LM-100J secured its launch customer in July 2014 through an order for 10 LM-100J by ASL Aviation Group.

The LM-100J leverages the scale (of 16 military users) in the C-130J and decades of prior development maturity, thus offering competitive operational and lifecycle costs, at least in comparison to new and thinly adopted platforms such as the Embraer KC-390 and Airbus Defence and Space (DS) A400M. The LM-100J will also offer greater payload than the Airbus DS C295 and Leonardo C27J.

In contrast to the L-100, the LM-100J benefits from the C-130J’s Rolls-Royce AE2100D3 turboprop engines, which have a higher power-rating than the L-100’s T56 (by 150 hp), are quieter (in line with the Federal Aviation Administration’s Stage 4 noise limitations), and use of full-authority digital engine control.

While several overseas manufacturers are working to access the legacy Hercules (C-130B/E/H) market by offering successors, it will be a challenge to overcome Lockheed Martin (which pushes the saying: “only a Herc can replace a Herc”). Granted, the C-130J has a high inclusive (i.e. flyaway cost, maintenance and training) unit cost of USD $150-200 million, prospective customers will be confident of the Super Hercules’ performance under difficult conditions and long-term durability. Lockheed Martin is also fully committed to the platform, guaranteeing the long-term supply of spare parts, upgrades and new variants.

To address the C-130J Super Hercules’ higher cost and to fully compete against competitors, such as Airbus and Embraer, it would be interesting if Lockheed Martin offers a sub-variant of the LM-100J to militaries. There could be militaries that may simply want fixed-wing transports for transport, which in turn may not necessitate a self-defensive suite or costly subsystems for specialized missions (at least initially). A Super Hercules variant in the sub-$100 million inclusive unit cost could enable Lockheed Martin to enter cost-sensitive markets as well as renew its base in existing markets (e.g. South Africa and Pakistan).