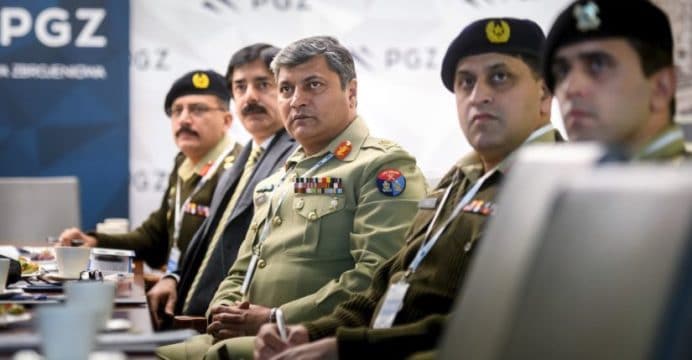 According to PGZ, the HIT delegation discussed “the potential of cooperation in the field of land-based platforms” at the meeting. PGZ’s photos show HIT officials reviewing product catalogues, including those for night-vision sights for small-arms.

As HIT embarks on the development of next-generation programs, such as the al Khalid 2 MBT, PGZ could work to connect its companies to fulfilling specific requirements in HIT’s channel. For example, PGZ could propose HIT with support in the development of new ballistic armour, main turret design, co-developing complementary weapons such as heavy machine guns and remote-controlled turrets and electronics subsystems. PGZ could also pitch its machining and factory equipment companies to HIT.

It is unlikely that HIT will adopt a complete system, especially a licensed or collaboratively designed vehicle such as the KTO Rosomak AFV or AHS Krab self-propelled howitzer (SPH). For the Pakistan Army, these are unlikely to be feasible for wide-scale adoption due to cost and layers of third-party regulatory issues (e.g. the AHS Krab uses South Korean and British inputs). However, regarding the AHS Krab specifically, HIT could benefit from OBRUM Gliwice and Huta Stalowa Wola SA experience in integrating diverse inputs to develop a new SPH solution. There could also be scope for partnerships in new SPH, AFV and other solutions designed for markets that are both cost-sensitive and not well-connected to Western suppliers.