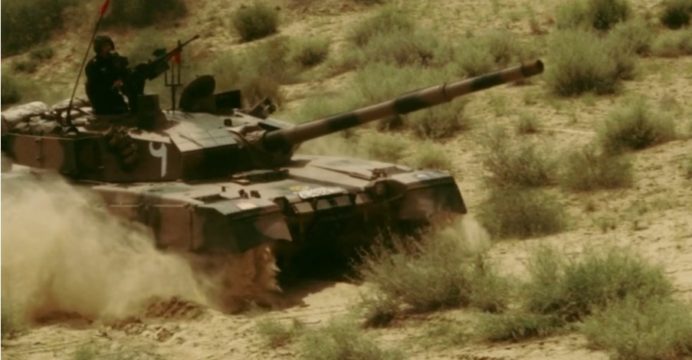 In the mid-to-late 2000s, the al-Khalid 2 was envisaged as a major update to the al-Khalid, which was itself intended to be the mainstay MBT of the Pakistan Army. However, strenuous finances amid the 2008 Global Financial Crisis, coupled with the decade-plus long counterinsurgency (COIN) campaign in the Tribal Areas, put the al-Khalid program into a much slower track in terms of procurement and development.

But with somewhat relative stability, it appears that the Army is comfortable with resuming its pursuit of big-ticket armaments, most notably an alternate dedicated attack helicopter to complement its upcoming Bell AH-1Z Vipers and new MBTs. In terms of the latter, the al-Khalid series will serve a central role.

At IDEAS, a Pakistan Army official told Army Recognition that the al-Khalid 2 will be powered by a 1,500 hp diesel engine, a notable upgrade from the 1,200 hp engine that powers the al-Khalid and al-Khalid 1 (a minor iterative update to the tank). The Kharkiv Morozov Machine Building (KMDB) 6TD-2 powers the al-Khalid today, and with Heavy Industries Taxila (HIT) signing a deal for 200 new engines from the Ukrainian supplier, the newly revealed 1,500 hp 6TD-3 would be a natural option for the al-Khalid 2.

The Turkish defence electronics giant Aselsan was also offering its next-generation electronics site, which comprises a fire control system, electro-optical sensor, and communications system, for the al-Khalid 2. Aselsan’s Regional Business Development Manager for the Middle East and Africa Oğuz Yemişçiler said that his company was “actively” involved in the al-Khalid program.

Get a Complete Picture of How Pakistan is Modernizing its Tanks, Artillery and APCs | Click Here

There is no guarantee that Pakistan would source the al-Khalid 2’s powerplant and internals from Ukraine and Turkey, respectively, but these two are the leading contenders (outside of China) in that they have the necessary technology as well as active interest for the program. The third broad area of development would be armour and design, particularly for the turret.

In armour, Ukraine could emerge as Pakistan’s leading partner. Malyshev Factory’s experience in armour technology is certainly extensive, and the input made in the Oplot-M could be of interest to the Pakistan Army for use on the al-Khalid 2. It is not known if the final design will exhibit a significant level of change, but depending on the Army’s finances, a leap as wide as the Polish T-72 to PT-16 upgrade is plausible.

For example, the Haider could be leveraged as an incentive for vendors, such as Malyshev and KMDB, to participate in the al-Khalid 2 and offer workshare and/or technology and expertise. In that vein, Ukraine and Pakistan did discuss the prospect of jointly manufacturing tanks and anti-tank guided missiles. This could be about the Oplot M and Haider.