Pakistan seeking growth in defence ties with the UK
January 21, 2020 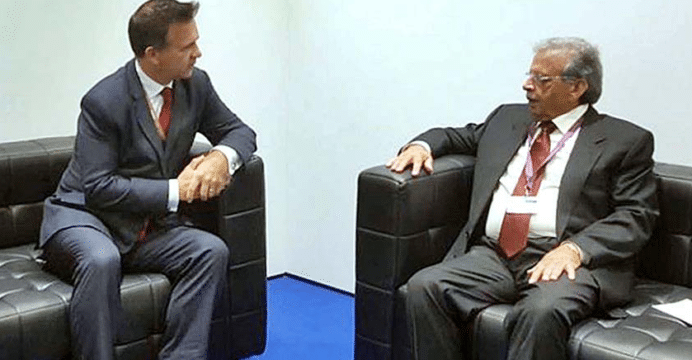 Pakistan seeking growth in defence ties with the UK

Pakistan’s Minister of Defence Production (MoDP) Rana Tanveer Hussain called for growth in defence ties between Pakistan and the U.K.

The MoDP is visiting the U.K. to attend the 2017 Defence and Security Equipment International (DSEI), a biennially-held defence exhibition being held in London. Heavy Industries Taxila (HIT), Pakistan Ordnance Factories (POF) and other Pakistani defence vendors are exhibiting at DSEI.

The MoDP met with the Minister of State for the Armed Forces of the United Kingdom Mark Lancaster.

“Rana Tanveer Hussain identified various fields in which both countries can … boost bilateral cooperation. He said that joint production projects should be started to expand ties,” the publicly-owned Associated Press of Pakistan (APP) reported on Wednesday, September 13.

Pakistan’s most recent acquisition from the U.K. is of seven surplus Royal Navy Sea King helicopters, three of which are undergoing refurbishment at Vector Aerospace for delivery by end of 2017 (Monch).

Pakistan has not acquired any big-ticket armaments from the U.K. since acquiring the Royal Navy’s Type 21 frigates (with Lynx helicopters) in 1993-1994. However, British inputs and technologies could reach Pakistan through third-party companies, such as Leonardo. Leonardo owns AgustaWestland, which has a final assembly site in Yeovil for its various helicopter models, such as the AW139. The Pakistan Navy also chose Kelvin Hughes’ SharpEye radar system for the Agosta 90B and Fleet Tanker – Turkey’s STM is the main contractor for both programs.

Pakistan may also be interested in the Turkish Aerospace Industries (TAI) TFX next-generation fighter. The TFX is slated to involve technical support and design work from BAE Systems, which TAI – along with the Turkish Undersecretariat of Defence Industries (SSM) – contracted to engage in the TFX in January 2017.

Pakistan’s first official mention of the TFX came from the MoDP in August 2016, when he had told the national broadcaster PTV that Turkey invited Pakistan to assist in integration work on the TFX. In November 2016, then Secretary of the MoDP, Lt. Gen (retired) Syed Muhammad Owais, had informed MSI Turkish Defence Review that regarding the TFX, “details and scope of collaboration and participation is being worked between the two governments”.

In April of this year, the Pakistan Air Force’s (PAF) Chief of Air Staff (CAS) Air Chief Marshal (ACM) Sohail Aman told Bol Narratives, “We are integrating our technology with friendly countries, including Turkey. We are thinking of producing the next-generation aircraft by pooling resources with them. For this, the basic framework and agreements have been made.” In subsequent statement, ACM Aman added, “We are also collaborating with Turkey for developing a next generation aircraft.”

The TFX notwithstanding, the U.K.’s expertise and experience in various aviation industry work could be of value to Pakistan, especially as it seeks to build adept industry capacities at home. The MoDP’s meeting with Marshall Aerospace and Defence Group could point towards that track, which may push the PAF to request consultancy and advisory support for initiatives such as the Aviation Design Institute (AvDI), Air University’s Kamra campus and Pakistan Aeronautical Complex (PAC) growth.

Pakistan is unlikely to be a market for big-ticket British systems, such as ships and aircraft. BAE Systems and other large British defence industry firms do not appear to view Pakistan as a major prospective market, indicative of their absence from the biennially-held International Defence Exhibition and Seminar (IDEAS) in Karachi. Pakistan’s fiscal constraints limit its ability to pursue big-ticket arms from Western vendors in general, and the U.K. is among the costlier markets. India also maintains considerable foreign relations writ and industry ties in the U.K. Collectively, these factors render direct big-ticket transactions with Pakistan unrealistic, though third-parties in Italy and Turkey could help propel indirect growth. In tandem, Pakistan could examine specific solutions – such as Cobham’s life-support and in-flight refueling solutions – to effectively strengthen its existing big-ticket platforms.