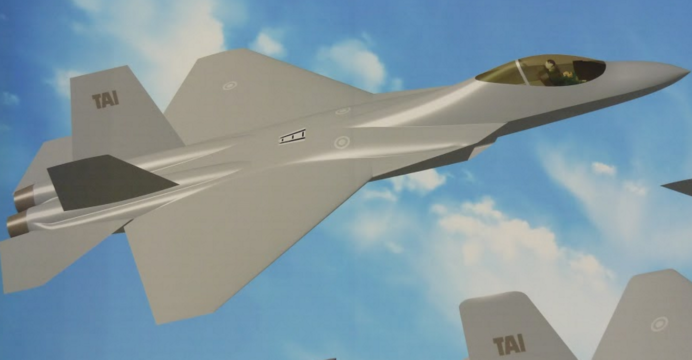 In a recent interview with the state-owned television network PTV (note: it is in Urdu), Pakistan’s Minister of Defence Production (MoDP) Rana Tanveer Hussain revealed that Turkey had invited Pakistan to participate in the development of its next-generation fighter program, the TFX. Specifically, Turkey had requested that Pakistan assists it on the “integration side” of the program.

Pakistan was first linked to the Turkish Aerospace Industries (TAI) TFX program in June when Turkey’s state-owned media outlet Anadolu Agency reported that the two countries were in talks over the TFX.

During the launch ceremony of the Pakistan Navy’s Fleet Tanker, which was designed by STM Turkey and produced at Karachi Shipyard & Engineering Works (KSEW), the Undersecretary of SSM (Turkey’s defense industry department) reportedly said in a speech that the door was open to Pakistan participation in the TAI TFX . The Turkish aviation news outlet Kokpit Aero reported that Pakistan was interested in the TFX.

In March, the Pakistan Air Force (PAF)’s Chief of Air Staff (CAS) Air Chief Marshal (ACM) Sohail Aman had announced that the PAF had begun to conceptualize its next-generation fighter requirements. In May, ACM Aman elaborated on the initiative and stated that indigenization would be essential to the program.

The specifics have not been disclosed, and one can only speculate exactly what the PAF is intending to do in regards to its next-generation fighter program. However, it is telling that the PAF has not formally or officially committed to the AVIC FC-31, which is surprising considering China’s role in being Pakistan’s principal supplier of high-tech arms, especially combat aircraft (i.e. the JF-17).

Given that the F-16s form the foundation of what the PAF considers its “qualitative edge” or “high-tech” fleet element, it is possible that the PAF is keeping the capability and performance threshold of the next-generation platform on the upper-end of the spectrum.

This is not an indictment of the FC-31, but would explain why the TFX, which will draw significantly from Western expertise and technology, is under consideration. In other words, the PAF is keeping its options open, and will seek the platform that strikes the optimal balance of performance, cost, and accessibility.

Based on Mr. Hussain’s comments, it seems Turkey or TAI had extended an industrial collaboration offer to Pakistan. Should the PAF select the TFX, Pakistan Aeronautical Complex (PAC) would benefit from some technology transfer as well as potentially commercial offsets, which could link PAC into the overall TFX program by providing all users with specific components and parts.

As one might imagine, this is quite different from the stated objective of the JF-17, which was to heavily mitigate the risk of sanctions. Domestic fighter production is not a simple or affordable undertaking. Pakistan had already invested considerably in the JF-17 program, and the inclusion of the next-generation platform does not preclude the JF-17 from further – parallel – development. The parallel development would be the likely course considering that a JF-17 variant will generally remain to be more affordable, accessible and scalable than any next-generation fighter solution.

That said, unlike the current situation with the F-16, the TFX may be accompanied by a comparatively deeper domestic support network, one that not only includes maintenance, repair, and overhaul (MRO), but also a measure of spare parts manufacturing, domestic research and development investment, and armament flexibility (in terms of one’s choice of air-to-air/ground munitions). It is not entirely “sanction-proof”, but it is a substantive improvement in comparison to the F-16.

A less likely scenario – though possible – is that the TFX offer may not require the PAF to buy the aircraft. TAI could simply contract PAC to undertake specific tasks. This would not be the first time PAC engages in work that does not necessarily involve the Pakistani armed forces. In 2013, TAI contracted PAC to produce parts for the Anka unmanned aerial vehicle (UAV), even though Pakistan does not operate the Anka.

In terms of broader impacts, discussions of this nature have essentially positioned Turkey as the leading prospective supplier for Pakistan’s next-generation arms requirements. From the T-129 ATAK dedicated attack helicopter, MILGEM corvette, and now TFX, Turkey could potentially be Pakistan’s top source of ‘Western’ arms. However, Turkey could very well be competing with China in some respects. Finances will be an issue for Pakistan, but Turkish offers or suggestions of transfer-of-technology and commercial offsets could help balance those limitations.