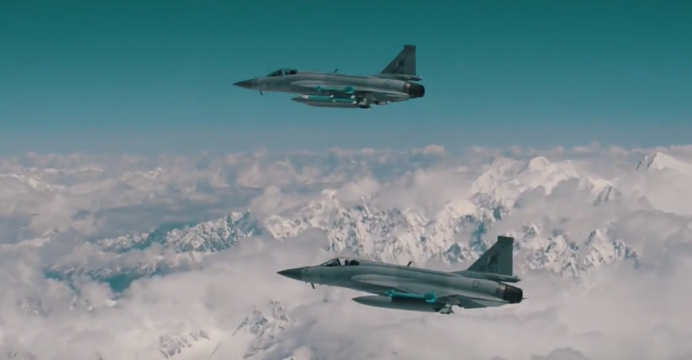 In 2017, the Pakistan Air Force (PAF) is expected to order the Block-III variant of the JF-17, which is co-produced by Pakistan Aeronautical Complex (PAC) and the Aviation Industry Corporation of China (AVIC). It seems that specific details regarding the JF-17 Block-III’s subsystems and design attributes are emerging, and the forthcoming JF-17B, the dual-seat variant of the Thunder, could inform much of it.

The JF-17 Block-III is the first major update of the Thunder, a lightweight multi-role fighter positioned as a cost-effective successor to legacy Cold War-era combat aircraft, such as the MiG-21, Mirage III/5, F-7, F-5 Tiger II and others. Currently, the PAF has more than 70 JF-17 Block-I and Block-II fighters, which are in service with five fighter units – four squadrons and a training unit at the PAF Combat Commanders School.

In 2015, the PAF revealed that the JF-17 Block-III would be equipped with an active electronically-scanned array (AESA) radar, helmet-mounted display and sight (HMD/S) system, updated avionics and electronic warfare (EW) and electronic countermeasures (ECM) systems, and potentially an infrared search and track (IRST) system (see: “Major changes ahead on JF-17 Block-III” for an understanding of how an AESA radar, HMD/S, etc, would improve the JF-17). However, specific details regarding the airframe and engine were not provided, leaving observers curious as to how the Thunder would manage the requisite cooling and weight requirements of the new subsystems, especially the AESA radar.

However, the dual-seat JF-17B might have incorporated those critical airframe changes. Alan Warnes (via AirForces Monthly) reports that the JF-17B has a taller tail, a larger nose and new internal spaces for fuel (to compensate for the space lost from the second seat). The JF-17B’s tail houses components for a new three-axis fly-by-wire (FBW) system. The larger nose was designed for an AESA radar (though the initial builds of the JF-17B will be equipped with the KLJ-7). If one factors out the second-seat, the single-seat JF-17 Block-III could possibly retain the JF-17B’s added internal fuel space.

It is not known if the JF-17B and/or JF-17 Block-III will incorporate a higher proportion of composites, which would help with reducing the weight of the airframe. At the 2016 Defence Services Asia exhibition, PAF officials had told IHS Jane’s that PAC was exploring new engines for the JF-17. The RD-33MK and WS-13 were cited as the leading options. The RD-33MK is marginally heavier than the RD-93 (dry weight: 1,099 kg vs. 1,055 kg) but has a higher afterburning thrust output (9,000 kgf vs. 8,300 kgf). There are clear thrust-to-weight ratio gains to be had, but it is not known if the PAF will pursue them with the Block-III.

Cost, regulatory ease and technical compatibility with existing weapons will likely push the PAF to select a Chinese AESA radar for the Block-III. The Nanjing Research Institute of Electronics Technology (NRIET) KLJ-7A reportedly promises a range of 170 km for targets with a radar cross-section (RCS) of 5 m2 and capacity to track and engage 15 and 4 targets, respectively (East West Pendulum). Pakistan will likely sole-source the EW/ECM as well, which would ideally use active phased-array transceiver modules (TRM).

The HMD/S-selection and inclusion of IRST are not known. At Air Show China 2016, AVIC displayed what appeared to be an HMD/S concept, but it has yet to showcase a marketable HMD/S product. The HMD/S market is confined to a handful of suppliers, with Elbit, BAE Systems and Thales accounting for practically all fighter-use HMD/S systems outside of Russia. Regarding IRST. It is possible, though unconfirmed, that the enlarged nose could potentially have room for an integrated IRST system. Otherwise, the PAF could dedicate a specialist hardpoint on the airframe for special mission equipment, be it IRST, targeting pods or EW/ECM pods.

Assuming PAC and CAC succeed in pushing the JF-17 Block-III into production from 2019, the 2020s should amount to an eventful period for the PAF. Unless the PAF secures another platform, the JF-17 Block-III is basically the PAF’s next qualitative driver, introducing contemporary technologies – such as AESA radars – to the fighter fleet.