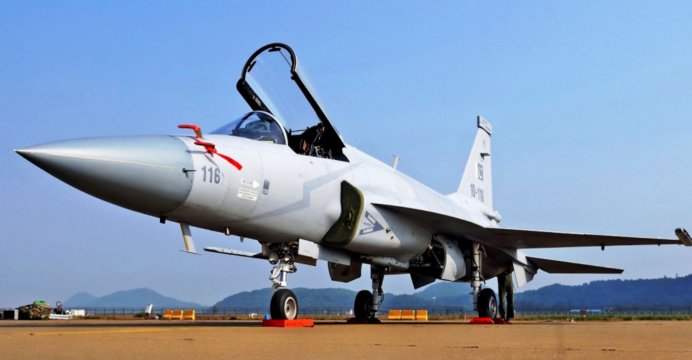 Pakistan expected to order its JF-17 Block-IIIs in 2017

The Pakistan Air Force (PAF) is expected to place its formal order for 50 JF-17 Block-IIIs from the Pakistan Aeronautical Complex (PAC) in the first half of 2017, reports Alan Warnes (on Asian Military Review).

Three two-seater JF-17Bs will also be built, of which two will be assigned to the PAF. Alan Warnes learned that these JF-17Bs will be used in “testing and development” for accelerating weapons integration.

Air Marshal Arshad Malik, the Chairman of PAC, was also enthusiastic about the JF-17’s export prospects, noting that PAC’s production output could be increased to “cope with future exports.”

Currently, 3 and 16 JF-17s are on order by Nigeria and Myanmar, respectively. Azerbaijan is reportedly re-interested in the JF-17, while Myanmar is reportedly in talks for additional fighters.

Regarding the JF-17 Block-III, Warnes noted that the Nanjing Research Institute of Electronic Technologies (NRIET) KLJ-7A and a Leonardo radar (possibly Vixen 1000) are viewed as the leading options for the Block-III’s active electronically-scanned array (AESA) radar requirement.

Based on the wording of the article, it appears that JF-17 Block-III production is scheduled to begin shortly after the conclusion of the PAF’s Block-II run.

While the AESA radar bid has narrowed to the KLJ-7A and a Leonardo system, the issues of helmet-mounted display and sight (HMD/S) systems, new electronic warfare and electronic countermeasures, and new munitions are still open. However, seeing that the Block-III program will be put into motion this year, there may be industry traction in each of these issues through 2017.

It also appears, though unconfirmed, that once currently set exports are completed, PAC will only produce Block-IIIs (for export and domestic use alike). In fact, Alan Warnes stated that PAC will “not halt” JF-17 production between Block-II and Block-III, meaning, prospective export customers from late 2017 or early 2018 will see the JF-17 Block-III.