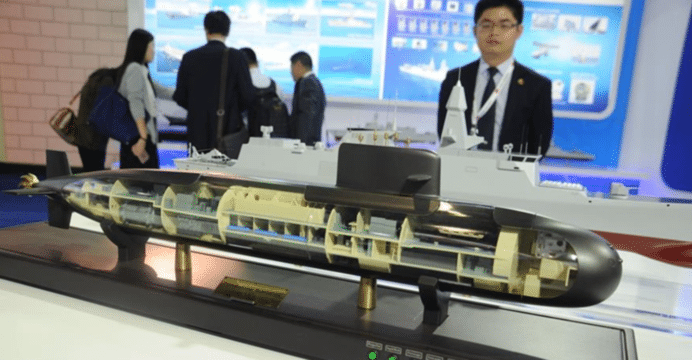 In 2016, the Pakistan Navy put two big-ticket procurement programs into motion: First, the procurement of eight new air-independent propulsion (AIP)-powered submarines from China. Second, the upgrading of one Agosta 90B AIP submarine, with an option to upgrade the remaining two.

Collectively, this is a multi-billion-dollar initiative, one aimed at vastly improving the Pakistan Navy’s sub-surface force in quantitative and qualitative terms. Besides the strategic-deterrence potential of the Chinese – i.e. Hangor-class – submarines, Pakistan might also have the fiscal room to potentially configure the Hangor-class along the same industry-standard lines as the upgraded Agosta 90Bs.

In June 2016, the Pakistan Navy awarded the Turkish defence contractor Savunma Teknolojileri Mühendislik A.Ş. (STM) a contract to upgrade the Navy’s three Agosta 90B – i.e. Khalid-class – submarines. If all three ships are upgraded, the total value of the program would amount to U.S. 350 million. With integration work to take place at Karachi Shipyard & Engineering Works (KSEW), the first ship is scheduled for delivery in 45 months, with the remaining two completed within 12 months of one another.

STM has awarded contracts to a relatively diverse set of suppliers. In Turkey, electronics vendors Aselsan and Havelsan were tasked to supply electronic support measures (ESM) and integrated naval command and control suites, respectively. However, non-Turkish companies were also linked to the program. HENSOLDT (also known as Airbus Defence & Space (DS) Optronics) was contracted to supply the SERO 250 periscope and OMS 200 optronic mast. Britain’s Kelvin Hughes’ SharpEye I-band pulse-Doppler radar was also selected for both the Agosta 90B submarine as well as the Navy’s new STM Fleet Tanker.

The Airbus DS Optronics SERO 250 is night-vision capable and easily configurable on legacy submarines. The OMS 200 is an electro-optical and infrared (EO/IR) system that can provide target tracking.

Aselsan’s ESM – i.e. the ARES-2SC/NS – is the latest iteration of the company’s ARES-series, which is used onboard two of the Turkish Navy’s Type 209/1200 diesel-electric submarines (SSK). Functionally, the ARES is to be used for monitoring radar emissions, and in turn, the ARES contributes to a “picture” of the area’s signals and electronics trends. In effect, the ARES is a signals intelligence (SIGINT) asset, which means that the submarine can be deployed (in part) as an electronics intelligence (ELINT) platform. This may supplant the Thales DR-3000U radar warning receiver (RWR) system.

Havelsan’s contributions appear to be taking place in the human-machine-interface (HMI), subsystems integration and fusion, and combat management space. It is not known if the Agosta 90B will benefit from the exact same system being designed for Turkey’s Type 214 submarines, but it could be a related system. In effect, the Havelsan system appears to be replacing the Thales SUBTICS system. This may provide the Pakistan Navy an opportunity to technically expand the Agosta 90B’s munitions arsenal, though it will be up to Havelsan (i.e. the Turkish government) to determine the extent. One would assume that flexibility in such areas had factored into the Pakistan Navy’s decision to select Havelsan.

Kelvin Hughes’ SharpEye radar will replace the Thales I-band radar already in place in the Agosta 90B. The SharpEye can be used for navigation as well as target tracking, strengthening the submarine’s situational awareness, even against targets with low radar cross-sections (RCS), such as ‘stealthy’ surface warships.

Thus far, STM selected vendors from Turkey, Germany and Britain. STM has yet to announce the vendor to replace the Thales TSM 223 sonar suite, but considering the vendor pool, Atlas Elektronik GmbH should be a contender. Atlas Elektronik’s Integrated Sensor Underwater System (ISUS) 100 is a complete suite, one with multiple sonar systems, a command and control suite, ESM, and weapons integration.

Given that Havelsan and Aselsan are supplying the command and control and ESM suites, respectively, the Pakistan Navy might opt for Atlas Elektronik’s sonars, such as its Extended Towed Array Sonar (ETAS), Enhanced Cylindrical Array Sonar (ECAS), and Forward Look Active Sonar (FLAS).

It could be prudent for the Pakistan Navy to configure the Hangor-class submarines along identical lines as the Agosta 90Bs. First, subsystem standardization would ease logistical strain, thereby making training and maintenance more seamless. Second, one may assume that STM and the Navy selected these systems because they are mature and capable designs. Third, be it the Agosta 90B or S26/Hangor, Pakistan will be undertaking integration work via KSEW. This may not be the case for the first for Hangor-class submarines, which are being manufactured in China, but the latter four will be built in Pakistan. That said, there is no reason why subsystem integration of the first four Hangor-class submarines cannot take place in Pakistan.

Deferred subsystem integration is not unprecedented, even for Chinese warships. After taking delivery of its C28A corvettes from the China State Shipbuilding Corporation (CSSC), Algeria had the Thales Smart-S Mk2 radar integrated to the C28A.

Permissibility and technical capacity to integrate third-party systems to the S26/Hangor should not be an issue, rather, the main bottleneck would be cost. Although the price of the Hangor program is not publicly known, Thailand’s S26T program is projected to cost $1.02 billion for three submarines. The S26-series is essentially the S20, but with AIP.

It is likely that the Hangor is at least related to the S26, if not just another variant of that design. If the $340 million per-ship price point includes subsystems (e.g. sonar), then the unit cost could be in the range of $270 million. This assumes that the S26’s Chinese subsystems cost 60% of the Agosta 90B new systems, which are on average $117 million per ship.

If configuring the Hangor with an identical subsystem suite costs $387 million per ship, then that would be a 13-14% cost premium over sole-sourcing from China (this assumes that the S26T is indeed sourced from China only, and not customized). However, a sub-$400 million unit-cost is still lower than several Western designs, such as the DCNS Scorpene, which cost $500 million per ship.

Thus, cost may not be an insurmountable issue, though the added premium will require an assessment as it would sum to $376 million for all eight Hangor submarines. The Navy might determine that such funds could be spent in other realms, such as new helicopters to replace the aging Sea Kings.