Keep an Eye Out for the Denel Dynamics Marlin Air-to-Air Missile
February 18, 2020 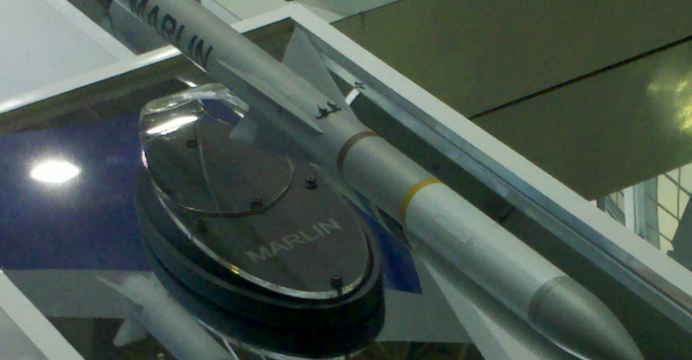 South Africa’s Denel Dynamics is an interesting company. Although they are in possession of some of the world’s advanced and commercially available air-to-air and air-to-surface munitions, they are fairly low-key. While many are familiar with the Raytheon AIM-120 Advanced Medium Range Air-to-Air Missile (AMRAAM), Russian Vympel R-77 and European MBDA MICA, not as many seem to know about the Denel R-Darter. The R-Darter was the mainstay beyond visual range air-to-air missile (BVRAAM) of the South African Air Force (SAAF) from 1995 to around 2008 (at which point it was ostensibly retired alongside the SAAF’s Cheetah C multirole fighters). The R-Darter BVRAAM was used by the SAAF alongside the Denel U-Darter, a within visual range air-to-air missile (WVRAAM).

In 2007, building upon its experience and technological base, Denel Dynamics initiated the development of the A-Darter, a 5th generation high-off-boresight (HOBS) WVRAAM, in partnership with a group of Brazilian firms, among them Opto Eletrônica, Mectron and Avibrás. The A-Darter cleared its initial tests in 2012 and was slotted to enter service with the South African and Brazilian air forces in 2014. In terms of the marketed technology features, the A-Darter look like an impressive system: The WVRAAM uses an imaging infrared (IIR) homing seeker along with thrust-vectoring nozzles, enabling it to chase its heat-emitting target at close quarters with a high level of maneuverability. The A-Darter can be cued using a helmet-mounted display and sight (HMD/S) system as well.

From what is apparent, Denel Dynamics’ partnership with its Brazilian counterparts was the best thing that could have happened for the A-Darter, as evidenced by the fairly smooth development track of the program since its joint-initiation. In fact, the missile may very well have its first large export order on the horizon considering that the Pakistan Air Force (PAF) singled out the A-Darter as a potential option for the JF-17 Block-III.

Now with the A-Darter’s baseline development complete, Denel is looking to put its next-generation BVRAAM program into gear. The company’s work on a next-generation BVRAAM has been an ongoing development: It was initially known as the T-Darter, but was then re-designated as the B-Darter in 2011. The new program, now designated as ‘Marlin’, is envisaged as a 100km active radar-homing air-to-air and surface-to-air missile (SAM) (Jane’s). Granted, the SAM aspect will likely end up as a medium-range system (as is the case with most medium-to-long range AAMs repurposed as SAMs).

The Marlin is an impressive and ambitious program. For example, not only would it equip the firm with one of only a handful of next-generation BVRAAMs on the market, but also potentially a reliable medium-range (40-50km) SAM system that could be used on land and on sea. With such goals in mind, it is clear that South Africa would not find a better partner than Brazil, who has the economic scale and technological expertise to help develop such munitions and export them, even to relatively difficult markets such as Pakistan (recall the sale of 100 Mectron MAR-1 anti-radiation missiles to the Pakistan Air Force in 2008-2009). The Marlin is scheduled to run through its first air-to-air tests in November 2016.

Should the Marlin succeed and complete its development, it is possible – maybe even likely – that it will cement South Africa’s Denel Dynamics as well as potentially Brazil’s Mectron et. al as top competitors in the modern munitions industry. Together, the two parties have successful orders (with real follow-on potential) in emerging defence markets such as the United Arab Emirates, Algeria and Pakistan, programs such as the Marlin will merely solidify those gains, and expand them.