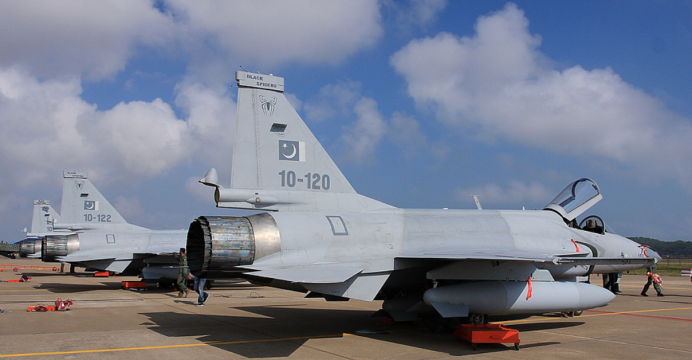 The previous part of Quwa’s JF-17 series outlined the major changes coming to the platform via the development of JF-17 Block-3. Whereas the JF-17 of today is a significant improvement for the Pakistan Air Force (PAF) in terms of being an effective backbone fighter, the JF-17 of the near future (i.e. Block-3) is poised to possess characteristics of (at least on its own terms) a genuine force-multiplier and high-tech asset. This point should not be construed for suggesting that the JF-17 would somehow become better than the Su-30MKI or Rafale, absolutely not, but rather, with an Active Electronically Scanned Array (AESA) radar, Helmet Mounted Display and Sight (HMD/S), and the next wave of advanced air-to-air and air-to-surface weapons, the JF-17 would be a credible means of defence for Pakistan.

This piece will discuss one of the most critical gains of the JF-17 program, the ability for the PAF to freely integrate advanced weapon systems of its choice to the platform, thus enabling it to assume the same mission capabilities of the PAF’s marquee fighters, the F-16 Block-52+, the F-16 Mid Life Update (MLU), and the Mirage ROSE-I/II/III. Not only that, but in some cases (that are unique to the PAF due to political or economic reasons), to enable the JF-17 to take on roles that even PAF F-16s likely would not (such as long-range stand-off strike).

Based on the arms-transfer database compiled by the Stockholm International Peace Research Institute (SIPRI), the PAF JF-17’s entire weapons inventory at induction was composed of purely Chinese air-to-air and air-to-surface munitions. Each of these munitions were discussed in a previous piece on Quwa, but the short of it is that they imbued the JF-17 and the PAF with beyond-visual-range (BVR) air-to-air and precision-strike capabilities. However, access to Chinese technology has not stopped the PAF from integrating additional weapon-systems onto the JF-17, nor will it preclude the JF-17 from being supported by the Pakistani defence industry.

The first high-profile addition to the JF-17’s inventory would be the Mectron MAR-1 anti-radiation missile.[1] Developed and produced in Brazil by Mectron and the Aerospace Technology and Science Department, the MAR-1 was designed to target and engage signal emitting targets (note the discussion on radar technology in the prior piece). In other words, radars. A missile of this nature is used in Suppression of Enemy Air Defence (SEAD) operations, and the MAR-1 specifically was designed to work as using its own passive anti-radiation seeker as well as pre-programmed coordinates. In fact, the MAR-1 is also capable of targeting based on information from radar warning receivers (RWR) (which are discussed in further detail in this piece), i.e. the signals registered by the JF-17 or other aircraft, such as the Erieye and ZDK03 Airborne Early Warning & Control (AEW&C) aircraft in PAF service.

Pakistan ordered 100 MAR-1 anti-radiation missiles (ARM) for $108 million U.S. At over $1 million per missile, it was an expensive deal, but some suggested that transfer-of-technology (ToT) was involved, but this has not been confirmed.

Overall, the MAR-1 stands as a critical piece in the PAF’s capacity to take on enemy air defence networks (involving radars and the surface-to-air missile systems that rely on said radars). It should be noted that as of the writing of this article, the PAF’s F-16s are not equipped with modern anti-radiation missiles necessary for SEAD missions. The MAR-1’s integration has been confirmed on the PAF’s Mirage ROSE fighters, with integration on the JF-17 slotted for the near future.

In terms of air-to-surface weapons, one of the PAF’s indigenously sourced assets is the H-series of precision-guided glide bombs developed by Air Weapons Complex (AWC) and produced by the National Engineering and Scientific Commission (NESCOM). Word of the  H-2 and H-4 initially came about in 2003, but it was in 2004 when it was more clearly understood exactly what AWC  had developed. The H-2 and H-4 were based on the South African company Denel’s Raptor-I and II. Like the Raptor-I, the H-2 is a TV-guided glide-bomb design with a range of 60km. The H-4 – like the Raptor-II – is a rocket-boosted version of the H-2/Raptor-I, and as a result, possesses a range of 120km. At present the H-2 and H-4 are used by the PAF’s Mirage ROSE fighters, but they will eventually see integration on the JF-17. The JF-17 may also use the H-2 and H-4 in conjunction with a targeting pod such as the Chinese WMD-7, a modular solution that can enable any JF-17 in the PAF to use the H-2/H-4 with the support of optical and infrared guidance (in case of heavy electronic warfare jamming), which would be an alternative to having a specially modified airframes available to fewer units. 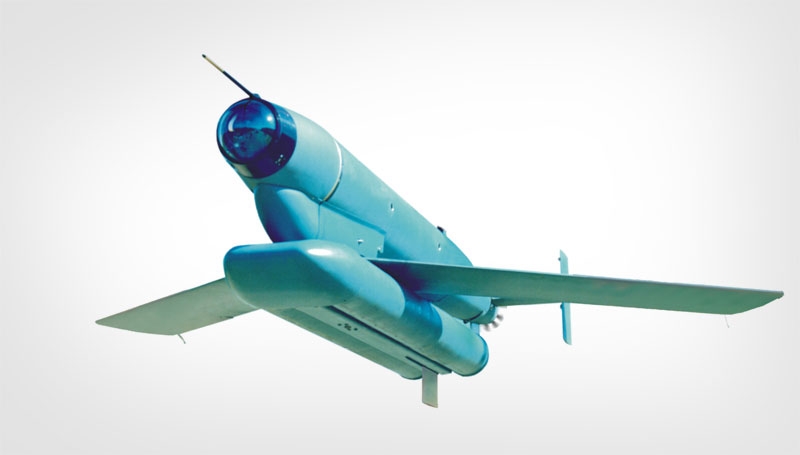 Denel Dynamics Raptor-II. This is the originator of the H-4.

Stand-off air-to-surface weapons such as the H-2 and H-4 are important advances for the PAF as it allows the PAF to potentially engage targets in India from within Pakistan (and away from particularly dangerous environments in general). This is a key capability to have if one intends to engage in pre-emptive strikes. In addition, the PAF bought large numbers of LS-3 and LS-6 precision-guided bombs (PGB) kits. The LS-3 and LS-6 are similar to the American Joint Direct Attack Munition (JDAM) in that they are essentially kits meant for unguided general purpose bombs (GPB), transforming the latter into PGBs. The Pakistani firm Global Industrial Defence Solutions (GIDS) developed a similar solution in the form of the GIDS Takbir. Specific details are unclear, but if developed along the lines of the JDAM and LS-3/6, then the Takbir is essentially a smart-kit for GPBs, most likely Mk-82 GPBs, which are common and also produced by AWC. 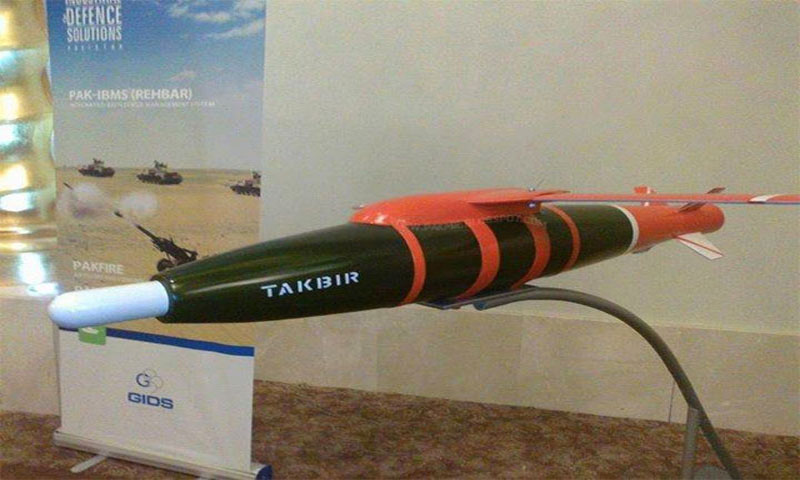 The Takbir PGB by Global Industrial and Defence Solutions.

Given the large numbers of LS-3 and LS-6 slotted for PAF service, it is likely that the GIDS solution will be maintained as a measure of redundancy to ensure that critical offensive capabilities are produced in-house and not just imported. GIDS will probably end up replenishing the PAF’s PGB stocks over the years as well. The GIDS Takbir program will hopefully see further development in the future, especially in terms of enabling heavier Mk-83 (500kg) and Mk-84 (900kg) GPBs for precision-strike.

The upper-spectrum of the PAF’s stand-off strike capabilities sit with the Ra’ad air launched cruise missile (ALCM) developed and produced by Air Weapons Complex (AWC). Ra’ad has a range of 350km and while it is a key element of Pakistan’s nuclear deterrence spectrum, it is also a major conventional asset. The Ra’ad itself is similar to other ALCMs, such as the French MBDA SCALP/Storm Shadow and Turkish SOM. The Ra’ad’s airframe was designed around low-radar-cross-section (RCS) principles, so as to reduce its observability on radar, and the ALCM itself is powered by a turbojet engine. 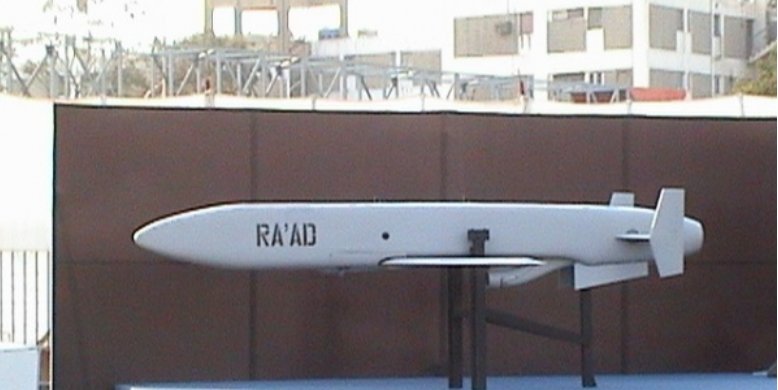 The Ra’ad Air Launched Cruise Missile (ALCM) was developed by Air Weapons Complex. It has a range of 350km and is capable of carrying conventional and nuclear warheads.

Some analysts, such as those of Jane’s, had noted that the Ra’ad bears some aesthetic similarities with Denel’s MUPSOW and Torgos designs. This aspect will be discussed in a future article, but the similarities are not coincidental as Pakistan did draw from South African technology since the late 1990s, and it may do so again (if it is not already) in the near future as well. In any case, Ra’ad is an important platform, not just for its ability to house nuclear warheads, but also in conventional terms. It was reported in February 2008 that Turkey and Pakistan had agreed to jointly develop precision-guided sub-munition technology.[2] If these efforts come to fruition, it would not be a significant stretch to suggest that a sub-munitions dispenser could be developed for the Ra’ad (and possibly even other systems), thus allowing the missile to serve a role in engaging scattered targets, such as tanks and armoured vehicles. Additional improvements to Ra’ad, such as in range and the airframe (for further reduction in RCS and weight), should not be ruled out either.

The integration of a HMD/S system onto the JF-17 (starting with Block-3) will enable the fighter to effectively use 4th and 5th generation high-off-bore-sight (HOBS) within-visual-range air-to-air missiles (WVRAAM). The Denel A-Darter (a joint-program between South Africa and Brazil) was recently cited as a possible option for the JF-17.[3] With its thrust-vectoring nozzles (which can direct the rocket’s exhaust to various directions) and infrared-seeker, the A-Darter was designed to be a highly maneuverable heat-seeking WVRAAM. With an HMD/S, the pilot can lock-on to a target by simply directing his or her head towards to the target. Upon firing, the thrust-vectoring nozzles of the A-Darter will enable it to quickly engage in high-g maneuvers against the receiving target. If successfully acquired, the A-Darter could enable the PAF to at least partly offset the JF-17’s inherent aerodynamic limitations (e.g. lower thrust-to-weight ratio or TWR) in a dogfight.

The A-Darter is a joint program between Denel Dynamics (South Africa) and Mectron (Brazil). It is a 5th-generation high-off-bore-sight within-visual-range air-to-air missile. In a recent piece by close PAF watcher and writer Alan Warnes, the A-Darter was slotted in as a likely prospect for use on JF-17.

With the induction of the SD-10 beyond-visual-range air-to-air missile (BVRAAM) complete, there has been some hope to see the JF-17 eventually equipped with a long-range BVRAAM (i.e. in excess of 100km). The procurement and efficient use of such a system would depend on the range of the JF-17’s future radar. It is important to remember that the JF-17 was not meant to be expensive to the point of being unfeasible. Subsystems such as an AESA radar could easily tip the JF-17 into that direction, so one should expect limitations to what the JF-17 will be made capable of just as much as one should be hopeful for substantive improvements. If such improvements are forthcoming, then the PAF could potentially source a long-range BVRAAM from China or South Africa.

Note, this is not an exhaustive list of the munitions the JF-17 will use in the coming years. In fact, if AWC and NESCOMs’ work are of any indication, the Pakistani defence industry is capable of developing additional solutions, especially if it connects with potential partners in China, Turkey, South Africa and Brazil. The topic of Pakistani munitions development deserves its own piece, but there is enormous potential for the likes of NESCOM, AWC, GIDS and others to serve a pivotal role in expanding the JF-17’s air-to-air and air-to-surface capabilities.