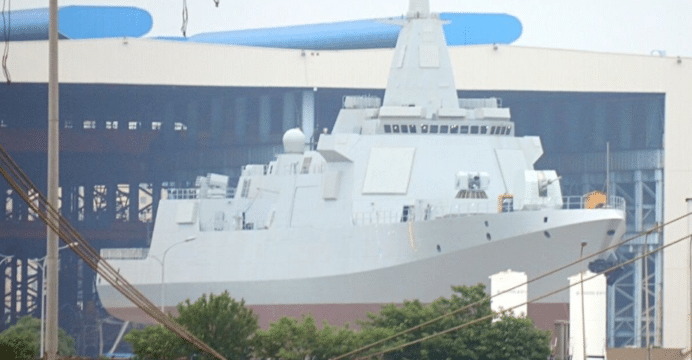 The Type 055 builds upon China’s ship design work of recent years, particularly the Type 052D destroyer, which is currently serving with the PLAN fleet.

China’s recent success in munitions development provide the Type 055 with a wide assortment of missiles, among them the C-802 AShM, YJ-18 LACM, HQ-16 (medium-range) and HQ-9 (long-range) SAM and CY-series ASROC. The Type 055 utilizes multi-functional phased-array radars for surveillance as well as target tracking and engagement purposes.

The Type 055, along with the PLAN Type 052-series of destroyers and burgeoning Type 054A frigate fleets, will form the mainstay of the PLAN’s future carrier battle groups.

The 2016 U.S. Department of Defence report concluded that China is building the PLAN to become a true “Blue Water” navy, i.e. a force that could reach what China perceives as its “far seas.”

However, the intent is largely driven to counteract naval growth from Japan, South Korea and India. The latter – like China – is building a fleet comprising of complete carrier battle groups, which Beijing views as a concern considering India’s position as a key U.S. ally with regards to the Pacific Ocean and East Asia.

It is not known how the Type 055 – or any of China’s other armament technologies – fare against direct U.S. or Western European analogues, but China is evidently succeeding at developing, producing and fielding contemporary weapon systems such as passive and active phased-array radars, guided munitions, modern surface and sub-surface combatants and combat aircraft, among others.

Beijing’s vast research and development investments and domestic scale will allow it to iterate (on quality and performance) whilst regularly field modernized variants. In a sense, the Type 055 – like the J-20, Z-10 and others – reflect both a culmination and baseline platform of Chinese weapons development.