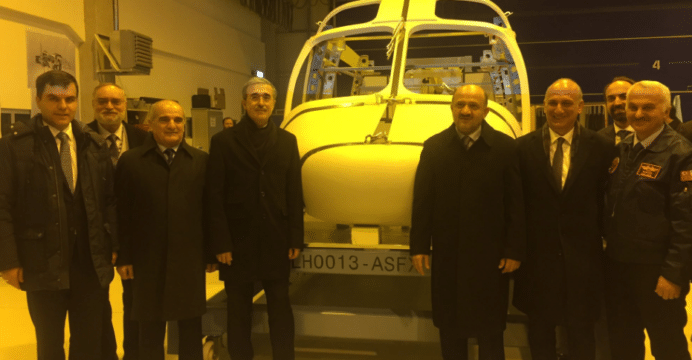 Turkey's Undersecretary of Defence Industries, the Minister of Defence, and other officials standing in front of the T-625 prototype's fuselage.
Daily News
Jan 9, 2017 Bilal Khan -

The TAI T-625 is a twin-engine design capable of carrying up to 12 passengers. The five-ton helicopter is envisaged to replace the Turkish Armed Forces’ (TSK) legacy UH-1H Huey utility helicopters.

Development of the T-625 formally began in 2013 wen the Undersecretariat for Defence Industries (SSM) awarded TAI a contract to begin designing and developing a utility helicopter prototype. TAI aims to have the T-625 fly before the final quarter of 2018.

TAI has been working on the T-625 prototype in 2016. The company will also develop the T-625’s main gearbox and transmission. The Turkish defence electronics giant Aselsan will supply the T-625’s onboard electronics suite, which – at least for the military version – could potentially include the company’s active phased-array transceiver-based electronic warfare and countermeasures suite.

The T-625 will be powered by the Light Helicopter Turbine Engine Company (LHTEC) T800, a joint-program between Honeywell and Rolls-Royce. The LHTEC T800 platform – specifically the CTS800-4A – also powers the TAI T-129, the customized and upgraded Turkish variant of the A-129 Mangusta attack helicopter.

That said, TEI – TUSAŞ Engine Industries, Inc. is in the process of developing its own turboshaft engine to power the T-625 and, potentially, T-129. However, this program is not a short-term factor.

Aviation Week reports that TAI foresees domestic armed forces and civil demands requiring up to 300 T-625s. Defense News notes that TAI is aiming to sell 800 helicopters domestically, with another 400 being exported. TAI is hoping to leverage Ankara’s flexible foreign relations ties as a means to secure markets that may not be readily accessible to its competitors in the light utility helicopter space, such as Airbus Helicopters and Lockheed Martin/Sikorsky.

While Turkey spent the previous decade expanding its domestic supply channel for its armaments, the T-625 is a reflection of Ankara’s desire to become a leading defence and aviation exporter. Like the T-129 and T-70, Turkey could have simply procured an off-the-shelf lightweight utility helicopter and produced it – and even its turboshaft engine – domestically. But such a route would have suffered from the exact same obstacles as the T-129 and T-70 – i.e. no final authority in exports. While armed forces requirements can serve as a stimulus to drive local manufacturing, the substantive gains will come from export.

The T-625 will face several challenges, not least the developmental cycle which could affect its flyaway cost and the time it requires to become production-ready. Besides that, the light utility helicopter space is well supported by many competitors, such as Leonardo and its AW139 and – most recently – the Airbus-AVIC H175. With the AW139, Leonardo already has the necessary scale (via many adopters) to continue offering a competitively priced helicopter. In fact, existing AW139 customers may have a primary incentive to keep on procuring AW139s instead of a new design. The H175, while a new platform, will benefit from China’s expansive domestic market, which will also contribute to that platform’s scale and affordability.