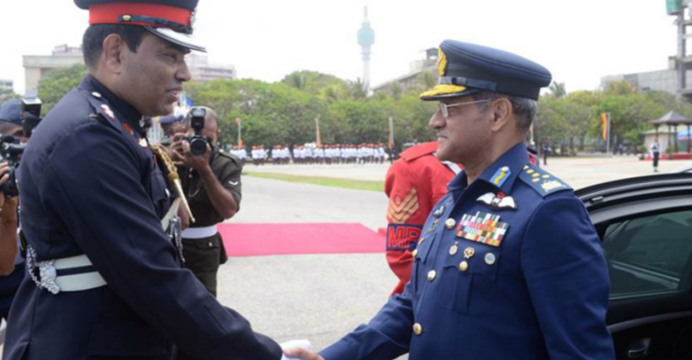 The PAF CAS’s visit is being billed as a bid to continue the multi-faceted ties between the two countries.

Earlier in the year, Pakistan made a strong push to sell eight JF-17 Thunder multi-role fighters to the Sri Lankan Air Force (SLAF). Officials details into how far talks had progressed or the extent Sri Lanka was ready to ink the contract were not released.

In the midst of strong foreign relations pressure from India, and Pakistan’s own inability to economically back the sale (via offering Sri Lanka a line-of-credit to finance the purchase), the JF-17 purchase ultimately fell through. By May of this year, the SLAF was reportedly in touch with Moscow for a Russian fighter type.

At this stage, it is apparent that Air Chief Marshal (ACM) Sohail Aman’s visit was diplomatic in nature, i.e. it was a bid on the Pakistan Air Force (PAF)’s part to maintain and enhance political, economic, cultural and defence ties between Islamabad and Sri Jayewardenepura Kotte.

While the prospect of selling the JF-17 is slim at this time, the PAF CAS could have pushed to deepen the PAF’s relationship with the SLAF. This could be done by broadening the scope of training and personnel exchanges. The PAF could potentially even extend a bridge to the Airpower Centre of Excellence (ACE), the PAF’s emerging counterinsurgency (COIN) focused training institute. Accounting for the SLAF’s COIN experience may be of interest to the PAF, especially as it intends to position ACE as a leading institution.

In terms of commercial sales, the Pakistan Aeronautical Complex (PAC) Super Mushshak basic flight trainer may have a reasonable chance in securing a spot in the SLAF’s fleet. With a recent wave in successful sales in Qatar, Nigeria and potentially Turkey (which could be PAC’s largest single Super Mushshak order), the Super Mushshak could be positioned to the SLAF as a credible screening and basic training tool.

Securing a JF-17 sale to the SLAF is unlikely to be on the radar at this time. India will assuredly exert what pressure it can onto Sri Lanka to scuttle such a deal, which – as a big-ticket sale – could be seen in New Delhi as an enabler for a deeper Pakistani presence in Sri Lanka. While an improved JF-17 (e.g. JF-17 Block-III) would be beneficial, arms sales are more than simply transactions, they are the by-product of strong foreign relations clout and economic muscle.