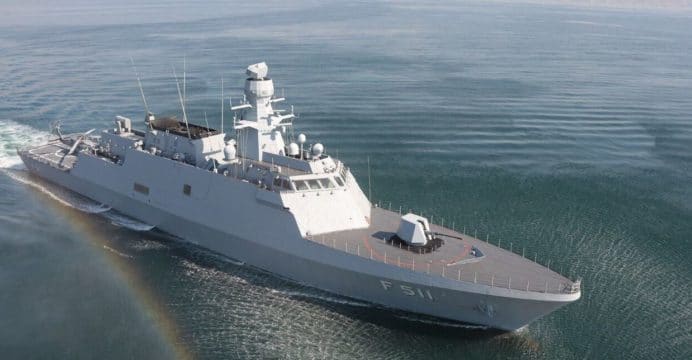 On 29 September, the Istanbul Shipyard held the steel-cutting ceremony of the Pakistan Navy’s (PN) first MILGEM corvette. The Turkish president Recep Tayyip Erdoğan presided over the event alongside various government, naval and industry officials from Turkey and Pakistan.

The PN currently has four MILGEM corvettes on order, with all four ships due for delivery to the PN by 2023-2024. Construction of the first ship will last 54 months, but the remaining three ships will follow the first in quicker succession, i.e., at six month intervals of one another (ASFAT A.S).

Under the contract, which was signed in 2018, two of the ships will be built in Turkey, while the remaining two in Pakistan. Pakistan will also receive “complete transfer of technology and the transfer of intellectual property rights for the design of these ships.”

The fourth ship was to be a new frigate class (i.e., Jinnah-class) jointly designed by the primary contractor, ASFAT A.S. (Military Factories and Shipyards Management Inc), and Pakistan’s Maritime Technologies Complex (MTC). However, it appears that the new frigate design will apply to all four ships.

The VLS will be installed at the fore of the ship, behind the main gun. In addition, the PN’s MILGEMs will deploy a modified version of the GENESIS combat management system (CMS).

The PN MILGEMs will also deploy an “indigenously developed missile system,” which could be the Harba subsonic dual-anti-ship cruising missile (ASCM) and land-attack cruise missile (LACM). However, the most recent Ministry of Defence Production (MoDP) report also disclosed the development of a new supersonic missile for the PN, so the PN’s MILGEMs may deploy something other than the Harba ASCM/LACM as well.

The CNS did not specify if the inclusion of VLS was limited to solely the fourth ship, implying that all four MILGEM ships will be configured along identical lines. One indication for this change could be that in 2016, the PN was expected to procure four MILGEM Ada corvettes configured along similar lines to the Turkish Navy’s ships at $1 billion US. However, the deal is now reportedly worth $1.5 billion US.

The PN’s forthcoming Type 054A/P frigates will also deploy the HQ-16, but through 32 VLS cells. All four Type 054A/Ps are due by 2021. Interestingly, the Pakistan Army also inducted the HQ-16/LY-80, which shows that there is a measure of commonality between the Navy and Army on SAMs.

In addition to the significant modifications (which will at least apply to the fourth ship, if not all ships) is the fact that Pakistan owns the intellectual property (IP) rights to the design. Thus, it appears that the PN will commit to the design for the long-term and, potentially, add more ships of this type in the future.

The Jinnah-class corvette/light frigate is a fully multi-mission design. The HQ-16/LY-80 — which could have a range of 40 km or, if the PN opts for the newer configuration, 70 km – provides anti-air warfare (AAW) coverage. In addition, the Harba ASCM/LACM would provide long-range anti-shipping and stand-off range land-attack capability. If the Jinnah-class arrives by the time the PN deploys its supersonic missile (which is likely to be an ASCM), it could have a varied – and difficult to stop – anti-shipping load-out as well.