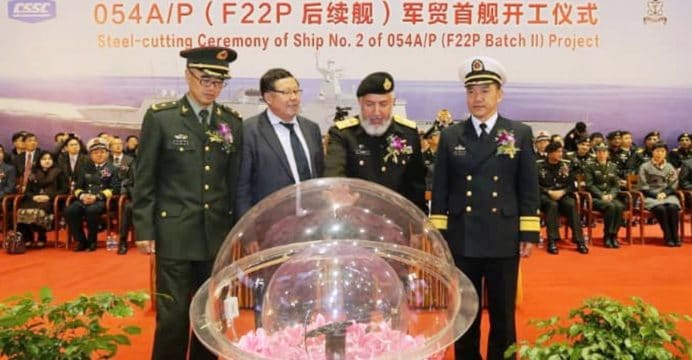 In a report by the state-owned Associated Press of Pakistan (APP), the steel-cutting ceremony was held in Hudong-Zhonghua Shipbuilding, a subsidiary of CSSC.

Pakistan is the launch customer of the Type 054A frigate. Under the PN’s program, the acquisition is being designated as “F-22P Batch II”, i.e., alluding to a reported plan in 2015 to procure another batch of F-22P frigates which would be improved versions of the Zulfiqar-class in the PN’s fleet.

In parallel, the China Shipbuilding Industry Corporation (CSIC) is fulfilling an order of eight new 2,800-ton air-independent propulsion (AIP) submarines for the PN.

Designated as the Hangor-class, the first batch of four is due by 2023, with the remaining four by 2028. The latter four will be built by Karachi Shipyard & Engineering Works (KSEW). KSEW is planning to conduct the steel-cutting ceremony of its first ship in October 2020 (Ministry of Defence Production).

Originally, it was reported that the PN selected the Type 054A in the same configuration as the People’s Liberation Army Navy’s (PLAN) Type 054A. One of the models displayed during the event showed a Type-054A in a configuration similar to that of the PLAN. However, an official rendering of the PN’s Type 054A/P appears to show a different main air and surface surveillance radar and, instead of the two quad-cell C-802 anti-ship missile (AShM) launchers, a two triple-cell AShM system.

However, in both scenarios, an over-the-horizon (OTH) radar was included. This will enable the PN’s new frigates to independently track surface targets at extended range, enabling them to make use of the Harba AShM. The Type 054A/P will also introduce a proper sea-based air defence element through its 40 km LY-80N surface-to-air missile (SAM) system.