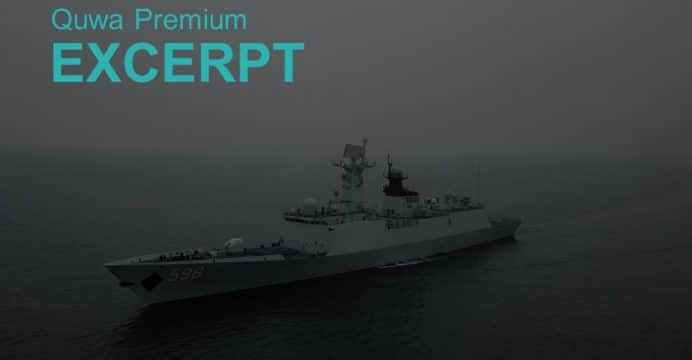 On 01 June 2018, the Pakistan Navy (PN) and Pakistan Ministry of Defence Production (MoDP) announced that they concluded a deal with China Shipbuilding Trading Co. Ltd. (CSTC) for two Type 054A frigates. This is a follow-on to an order – ostensibly for two other Type 054As – made in 2017. Through the Associated Press of Pakistan (APP), the PN stated that it will have four Type 054A frigates by 2021.[1]

“[The] Pakistan Navy will now have a total of 4 x Type 054 A ships in its Fleet by 2021. The induction of these ships will substantially enhance Pakistan navy’s war fighting capabilities, while effectively contributing towards Maritime Security Operations in the region.”[2]

The Type 054A joins a series of Pakistani naval procurement orders from China:

In 2006, Pakistan ordered four F-22P (an upgraded variant of the Type 053H3) for $750 million US.[3] These have been delivered and commissioned into service in 2008-2013 as the PNS Zulfiqar, PNS Shamsheer, PNS Saif and PNS Aslat. The final ship, PNS Aslat, was constructed in Pakistan by Karachi Shipyard and Engineering Works (KSEW) under a transfer-of-technology (ToT) agreement.

In 2012, the PN inducted its first of four Azmat-class fast attack craft (FAC) ordered from China Shipbuilding and Offshore Company Limited (CSOC) for reportedly $50 million US per ship.[4] Thus far, the PN has inducted the PNS Azmat, PNS Dehshat and PNS Himmat – the fourth and final ship is currently being constructed at KSEW. The PNS Himmat and its forthcoming sister ship also sport 2×3 anti-ship missile (AShM) launchers instead of the 2×4 AShM configuration of the previous two ships (for the C-802A AShM). In January 2018, the PN revealed that the revised launcher was for the new Harba dual-AShM and land-attack cruise missile (LACM).

In 2015, Pakistan inked its largest single big-ticket purchase from China to-date in the form of eight new air-independent propulsion (AIP)-equipped submarines (SSP). The model and price of the submarines were not disclosed, but they are reportedly slotted for delivery to the PN from 2022 to 2028.[5] The strategic importance of these submarines is well-established: they will enable the PN to field the Babur submarine-launched cruise missile (SLCM); strengthen the PN’s anti-ship warfare (AShW) and anti-submarine warfare (ASW) capabilities, especially within littoral waters; and serve as a deterrence to enemy naval activity in Pakistan’s exclusive economic zone (EEZ).

Monthly Report: Why the MILGEM Ada?

In 2017 and 2018, the PN has committed to four Type 054A frigates. Interestingly, the slated 2021 induction date indicates that the frigates are being sought on an expedited basis – this is likely to immediately supplant the ex-Royal Navy Type 21 frigates bought in the early 1990s (but in use by the UK since the 1970s). In addition to being new-built ships, the Type 054As are superior to the Type 21s in their respective subsystem, sensor and weapon suites. Thus, the Type 054A purchase effectively closes the chapter on the PN’s pursuit to replace the Type 21s.

Like the SSP deal, the pricing of the Type 054A contract has not yet been disclosed. However, The Diplomat estimated the unit-cost to be $348 million US per ship.[6] In 2013, China reportedly offered the Royal Thai Navy three Type 054 frigates for a price under Bangkok’s $1 billion US budget.[7] Though the pricing is not officially known, there are two key factors that will help keep the cost of each Type 054A low, at least in comparison to Western European ship designs. First, China’s generally lower material and production costs. Second, the economies-of-scale the PLAN has provided to the Type 054A through its procurement of a staggering 29 ships (with additional ships in the pipeline).

The PN’s Journey of Replacing the Type 21

The PN began its search for replacing the Type 21s in earnest in the mid-to-late 2000s. In 2008, then Chief of Naval Staff (CNS) Admiral Afzal Tahir had outlined that efforts were made to pursue various surplus and second-hand frigates…

Selecting the Type 054A

In retrospect, the Type 054A was the most plausible new-build, next-generation frigate outcome for the PN. Granted, there had been reports of the PN exercising an option to build another four – and apparently ‘improved’ – F-22P frigates…

Deploying the Type 054A

Thus, the PN is in the process of building a wartime-capable surface fleet, particularly through the Type 054A and, if finally inked, the MILGEM Ada…

The Potential is Long-Term

Ultimately, the necessity of immediately replacing the Type 21s and fiscal constraints will likely result in a modest subsystem, sensor and munitions package in the PN’s Type 054A…