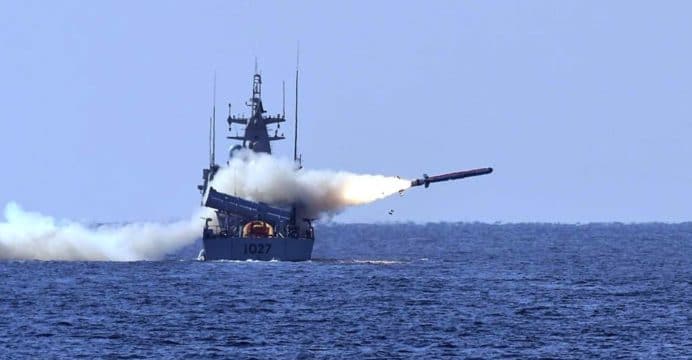 The existence of the Harba ASCM was revealed by the previous Chief of Naval Staff (CNS), Admiral (retired) Muhammad Zakaullah in his farewell speech in October 2017, who had also mentioned the Zarb coastal ASCM and Babur 3 submarine-launched cruise missile (SLCM).

Launched for sea trials in September 2016 and commissioned in July 2017, the PNS Himmat is the first of two Azmat-class FACs modified to deploy the Harba ASCM (the second is under construction).

During its commissioning ceremony, Karachi Shipyard & Engineering Works (KSEW) stated that the PNS Himmat was equipped with an “indigenously built (sic) Missiles System.” Unlike the preceding two Azmat-class FACs – i.e. PNS Azmat and PNS Dehshat – the PNS Himmat is equipped with dual-triple (2×3)-cell missile launchers instead of the dual-quad (2×4) launchers enclosing the C-802 ASCM.

It was apparent that the use of 2×3 launchers indicated the deployment of a – then unspecified – heavier and/or longer-range missile. It also appears that the Harba is connected to the missile launcher program assigned to Pakistan’s Directorate General of Munitions Production (DGMP) in 2014-2015.

As per Pakistan’s Ministry of Defence Production (MoDP) yearbook for 2014-2015, the DGMP was tasked with “the indigenous (sic) developing of ship-borne system with Land Attack Missile [LACM] and Anti ship Missile.” This launch system was due for completion by October 2018, but it aligns with the stated feature-set of the Harba, which is “a surface-to-surface anti-ship missile with Land Attack capability.” 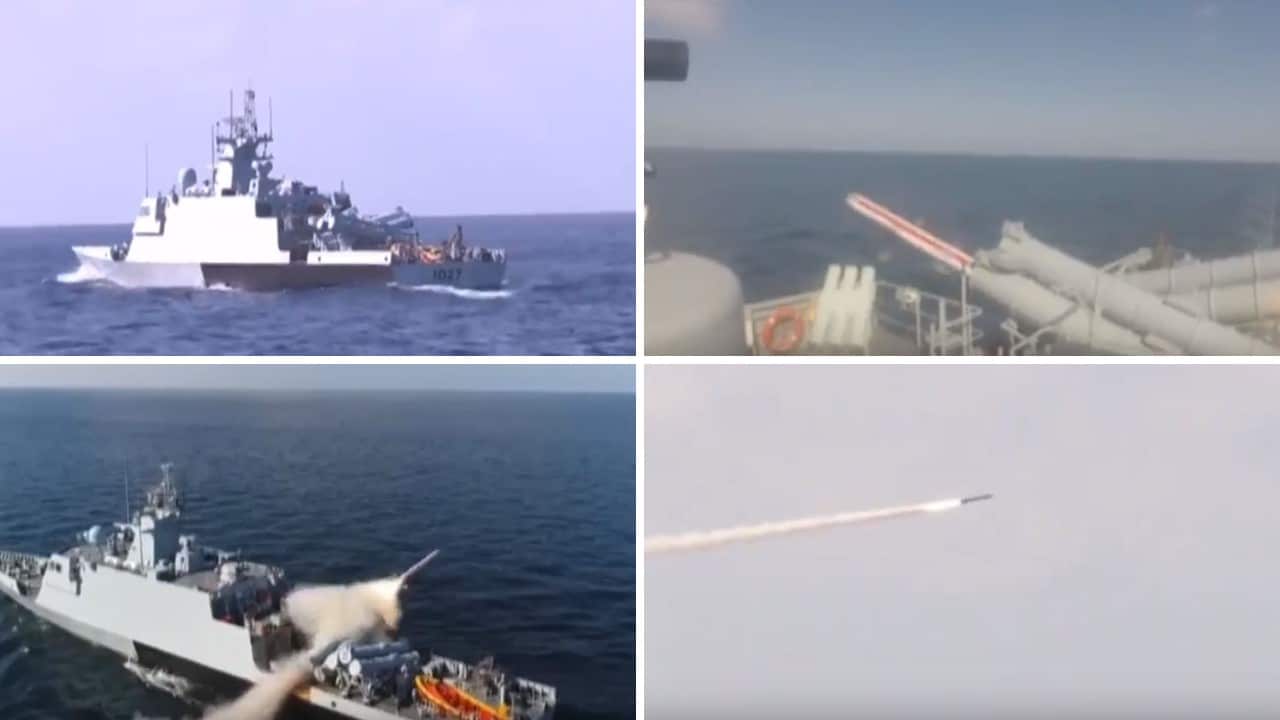 A photograph and video footage of the Harba ASCM’s launch appear to show a variant of the Babur-series LACM, which is deployable from land and has a stated range of 700 km. The Babur is a sub-sonic cruising design capable of low-altitude flight and terrain-hugging. In December 2016, Pakistan announced that it tested Babur Version 2, which Inter Services Public Relations said was capable of engaging “targets … at sea.” In January 2017, Pakistan also tested the 450-km range Babur 3 SLCM.

If the Harba ASCM is a variant of the Babur, then it would essentially be a long-range sea-skimming ASCM. Like the C-802 ASCM, the Harba ASCM would likely rely on an inertial navigation system (INS)-based mid-course guidance system coupled with a terminal-stage active-homing seeker. It is not known what kind of active seeker the Harba ASCM is using, though for anti-ship warfare (AShW) active radar-homing (ARH) is a widespread solution. However, imaging infrared (IIR) could be an alternative, especially involving cases where strong electronic warfare (EW) and electronic countermeasures (ECM) jamming is expected (which can interfere or scuttle an ARH seeker). The key aspect of the Harba is its potential range – 450 km or 700 km (depending on whether it is derived from the Babur 3 or Babur Version 2, respectively).

The Azmat-class FAC is not equipped with a long-range radar for surface target detection, tracking and mid-course guidance. To fully utilize the Harba’s range as an AShW solution, the PNS Himmat will require an off-board sensor, which could be another ship, an aircraft – such as the ZDK03/Karakoram Eagle airborne early warning and control platform – or land/shore-based radar to provide mid-course guidance. However, this would not be necessary if the Harba is used as a LACM against a fixed target, the PNS Himmat crew can simply input target information to the Harba’s INS guidance suite.

It would make sense for the Harba to be a standard ASCM of the forthcoming frigates being bought from China. Defense News reported that Pakistan inked a contract in June 2017 for a Type 054A frigate in the same sensor and weapons configuration as the People’s Liberation Army Navy’s ships. As per the Defense News report, Pakistan plans to procure a total of up to three of these frigates.

If correct, this configuration should include the Type 366 OTH radar, which is said to be a Chinese variant of the Russian Mineral ME. In fact, in 2014 China had agreed to sell an OTH radar suite to Indonesia under the designation of SLR-66. The SLR-66 could be the export variant of the Type 366. The SLR-66’s passive and active modes have ranges of 500 km and 280 km, respectively. This is close to the stated passive and active mode ranges of the Mineral ME (i.e. 450 km and 250 km, respectively).

The Type 054A can utilize the Type 366/SLR-66 OTH radar to provide mid-course guidance to targets for the Harba ASCM. In the capacity of a command ship, the frigate could also provide mid-course guidance support to other Harba-equipped ships, such as the Azmat-class FAC. Granted, the SLR-66’s active mode (280 km) would not be able to guide the Harba’s full range in AShW (assuming it is identical to the Babur), while the passive sensor is primarily meant for building OTH situational awareness. However, this might not be a concern for the Pakistan Navy as the Harba’s intended role is to be a dual-ASCM/LACM, the higher range envelope was likely intended for its deployment as a LACM.

Footage of the Harba’s test-firing: