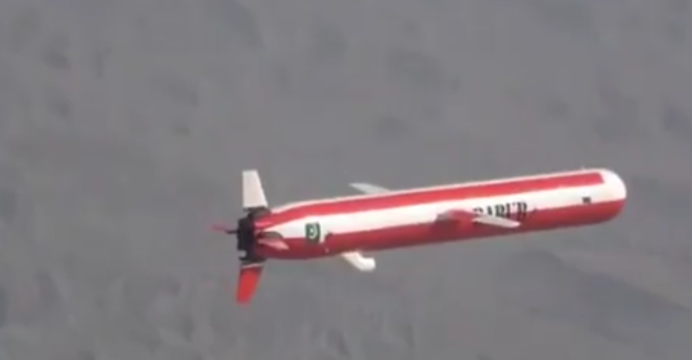 As per Inter-Services Public Relations (ISPR), the Babur Version-2 LACM possesses a range of 700 km and is capable of striking targets on land and at sea.

The Hatf (Vengeance) VII Babur was developed as an analogous solution to the BGM-109 Tomahawk, the U.S.’ mainstay LACM. The Babur is powered by a micro-turbofan or turbojet (unconfirmed) engine which is enables the Babur to fly at sub-sonic speed.

The Babur/Version-2’s TERCOM and DSMAC guidance systems enable the it to accurately engage targets without satellite-navigation support (the required target location information is stored within the missile. DSMAC serves as an optical sensor to match real-time imagery with stored imagery information).

The Babur-series is an essential component to Pakistan’s deterrence strategy. Like the Ra’ad air-launched cruise missile (ALCM) and Nasr tactical ballistic missile, the Babur enables the Pakistani military to launch nuclear warheads using munitions that could be deployed through a wide range of platforms, such as the combat aircraft and, potentially, submarines.

While the Babur Version-2 seems like a minor iterative update, the added note about it being capable of engaging “targets … at sea” suggests that the platform is being developed for anti-ship warfare. It is not clear if this is a priority, and how Pakistan is configuring the Babur for such a role (e.g. the use of an imaging infrared seeker versus active radar-homing seeker) is not known.