A Look at How the Pakistan Navy’s Pairing Eastern & Western Solutions
January 20, 2020 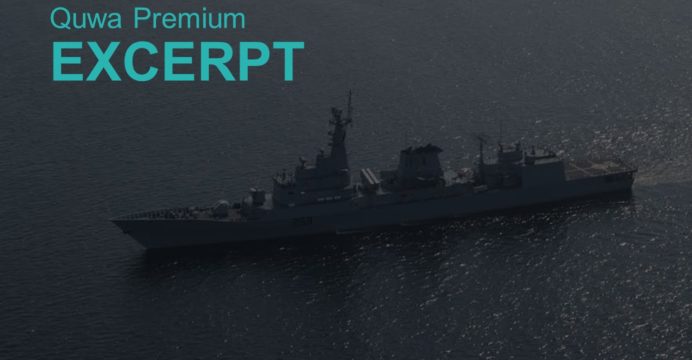 Since 2016, the Pakistan Navy (PN) has built perhaps its largest procurement pipeline to-date through the finalization of the following: eight air-independent propulsion (AIP)-equipped submarines (2,800 tons); four Type 054A/P frigates (4,000+ tons); four MILGEM corvettes/frigates (2,300+ tons); and two OPV 1900 corvettes (2,300 tons). The PN is slated to induct all these platforms through the 2020s, with the final set of ships (the final four of eight AIP submarines) due in 2028.

However, through 2018 and 2019, details started emerging of how the PN intended to configure its new ships, particularly the MILGEM and Damen OPV 1900 programs. In both cases, not only did the PN opt to elevate each platform’s role and capability-set (e.g., the PN’s MILGEM is a multi-mission frigate), but it is also configuring its ships with a mix of technologies from China, Turkey, Western Europe, and Pakistan.

Granted, it is unclear if the MILGEM customizations apply to all four ships, or only the final ship. However, in the Chief of Naval Staff’s (CNS) reported statements, the changes appear to involve all ships.

In either case, the PN is getting a MILGEM variant with 16 vertical launch system (VLS) cells for use with the HQ-16 or LY-80 medium-range surface-to-air missile (SAM). In addition, it is reportedly equipping the ships with two quad-cell C-802 anti-ship missile (AShM) launchers.

As for the Damen OPV 1900, the PN stated (during the launch of the lead ship) that it is a corvette, and it has a displacement of 2,300 tons. The PN intends to use the corvettes as multi-mission assets, and as part of that goal, the CNS stated that the ships will be equipped with “indigenously developed SSMs (surface-to-surface missiles” – i.e., the Harba dual land-attack cruise missile (LACM) and AShM.

In both situations, it will be interesting to see where the weapons and subsystems configuration work will take place. With the MILGEM, this is the first situation of integrating a Chinese VLS to a non-Chinese ship. Be it the first or last ship, Karachi Shipyards & Engineering Works (KSEW) would undertake the integration work at some point. The key will be whether it absorbs the know-how of designing the project.

Basically, not only did the Military Factory and Shipyard Corporation (ASFAT A.Ş.) – the main contractor of the PN MILGEM program – redesign the Ada corvette to have space for VLS, but it did it to ensure that there is enough space for the LY-80. It was unclear if even integrating a smaller VLS was tenable, but ASFAT apparently managed and created the space while also maintaining the ship’s weight distribution.