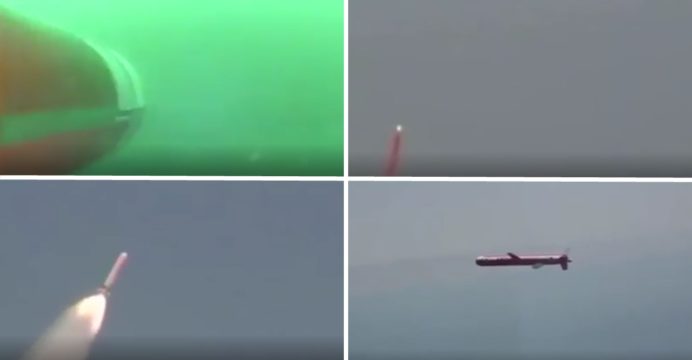 On 29 March 2018, Pakistan’s Inter Services Public Relations (ISPR) announced that the Pakistan Navy had successfully test-fired the submarine-launched version of the Babur – i.e. the ‘submarine-launched cruise missile Babur (SLCM Babur)’. The SLCM Babur has a stated range of 450 km.

According to the ISPR through a press release, the SLCM Babur was fired “from an underwater dynamic platform” and “successfully engaged its target with precise accuracy; meeting all … flight parameters”.

The ISPR added that the SLCM Babur is a component of a “credible second-strike capability” and a “step towards reinforcing the policy of Credible Minimum Deterrence through indigenization and self-reliance.”

This is the second time that Pakistan announced an SLCM test, with the first test being in January 2017 of the previously-designated Babur-3 SLCM. The stated range has not changed (at 450 km). Like the recent test, the original Babur-3 SLCM test was conducted from an unidentified ‘underwater mobile platform’.

Interestingly, the ISPR did release footage of the SLCM Babur test, showing it launch from its underwater platform in an encapsulated frame, reach the sea surface and eject its capsule.

It is apparent that Pakistan is not testing the SLCM Babur from a submarine. First, two of the three Pakistan Navy Agosta 90B submarines are undergoing an upgrade (being conducted in Pakistan with a state-owned Turkish defence contractor leading the effort). Second, the next-generation air-independent propulsion (AIP)-equipped submarines on order from China – i.e. the Hangor-class (II) – will not being reaching the Pakistan Navy until at least 2022. However, it appears that the tests are being done using a specially-made system. In 2010, MBDA had built an “instrumented model” of its SCALP Naval SLCM to test-fire the missile from underwater, “replicating submarine launch conditions”.

The long-term objective – driven by the SLCM Babur and the Harba dual-anti-ship missile (AShM) and land-attack cruise missile (SLCM) – is to build a comprehensive strategic element at-sea (from the surface and underwater). It is unclear what – if any – efforts are underway for range extension; but doing so would likely necessitate changes such as a more fuel-efficient engine, improved flight control system (e.g. using space and making room for more fuel) and reducing the missile airframe’s weight.