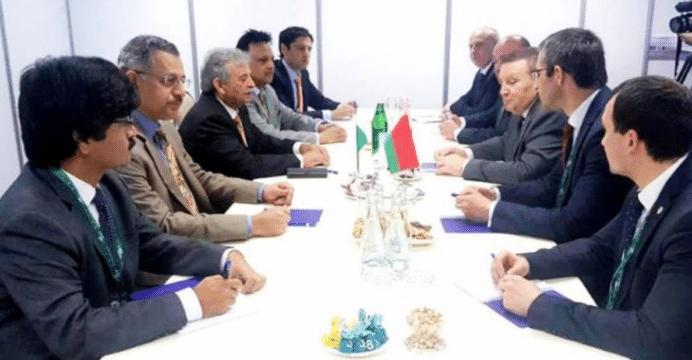 Pakistan and Belarus have agreed to enhance bilateral defence and defence industry relations, especially in the realms of production and collaboration.

According to Radio Pakistan, officials both from countries made the commitment during a meeting that had involved Pakistan’s Minister of Defence Production (MoDP) Rana Tanveer Hussain and the Chairman of the State Military Industrial Committee of Belarus Gurulev Sergei.

This follows a visit to Pakistan by a high-level Belarusian delegation in April 2016. Belarus had expressed hope that Pakistan would acquire its products, especially in the areas of optics and vehicles.

In its 2015-2016 yearbook, the Pakistan MoDP detailed successful demonstrations at Pakistan’s Institute of Optronics of Belarusian thermal imaging and red-dot sights.

Besides specific off-the-shelf systems, such as reflexive sights and magnification sights, Belarus could be viewed as a candidate for providing capacity building support for Pakistan’s production and development efforts. Belarus has investments in optics for small arms, radars and vehicles, which may interest the Pakistan MoDP from the standpoints of direct acquisitions and joint-development.

The latter, joint-development, is particularly important in that Belarus has shown, specifically through the course of its MILEX (International Exhibition of Arms and Military Machinery) defence exhibition last week, that it can leverage its existing defence industry infrastructure and talent pool to develop modern solutions.

Several of these solutions have transformative potential. For example, the PD-7 is a compact system that weighs 2 kg, yet it provides the RPG-7 user with precision-targeting through a laser-rangefinder and ballistic computer. The ballistic computer uses the information it has about the munition and the combat environment, such as the temperature, firing range, wind speed, target velocity and atmospheric pressure to provide an aim point for the user. This is similar to the VOSEL (M2) sight Pakistan acquired with the Alcotán-100, but with the ability to boost the threat credibility of exponentially cheaper RPG-7s.

Developing and producing solutions akin to the PD-7 may be of interest to the Pakistan MoDP, especially since these solutions can readily upgrade existing low-cost systems already available to Pakistan (without resulting in costly wide-scale induction programs).

As is the case with many smaller defence industries (e.g. South Africa, Brazil and Ukraine), Belarus has the ability to utilize its industrial infrastructure and talent pool to develop capable solutions provided there are sufficient levels of investment. Minsk seems to think of Pakistan as a potential source for that support, and Pakistan appears to be interested in the technology available.