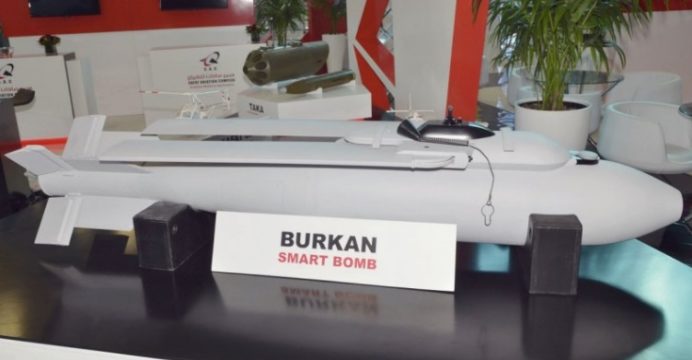 Speaking to IHS Jane’s, SAFAT’s representatives stated that the Burkan is a 250kg satellite-guided PGB with a maximum range of 80km when launched from an altitude of 10,000 metres. The Burkan is guided by GPS (which is interested as one would have expected Sudan to opt for Russia’s GLONAS).

The SAFAT Burkan is apparently in use by the Sudanese Air Force.

At this stage, the components to produce a functional PGB are available off-the-shelf, so to see Sudan – a relatively new entrant in the space – begin deploying PGBs is not surprising.

Whether a license-produced design from China (e.g. the FT PGB-series) or a bespoke solution, the point at hand is that PGBs and PGB technology is common enough such that a relatively wide range of countries can acquire the capability. Sudan has evidently gone as far as domestically producing PGBs and that too with reasonable stand-off range (i.e. 80km) capability.

Neither SAFAT Aviation Group or the Sudanese Air Force have confirmed platforms have been configured to carry the Burkan. However, none of the Sudanese Air Force’s combat aircraft platforms are beset with particularly onerous end-user restrictions; in other words, any (or all) of its main combat aircraft could have been configured for using the Burkan.