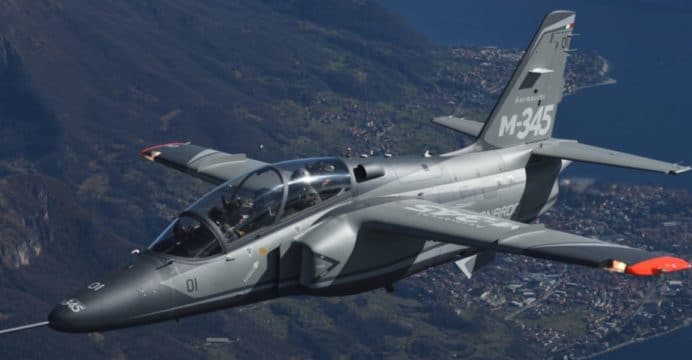 Paramount and Leonardo will configure the M-345 with Paramount’s SWIFT (Smart Weapons Integration on Fast-Jet Trainers) as well as a range of guided air-to-ground munitions.

Ralph Mills, CEO of Paramount Advanced Technologies (PAT), stated that Paramount designed the SWIFT to address “the growing need for multi-role configuration to adapt to different mission roles without [the need for] major re-configuration and extended time delay.”

In effect, the goal is to overcome the difficulty of procuring new, more sophisticated hardware by utilizing existing assets, and that too with comparatively limited changes to those existing systems.

The Paramount-Leonardo M-345 venture is aimed at presenting an affordable, but highly capable attack solution to budget-conscious air forces in Africa

Quwa Premium (Free Sample): Why Pakistan is Unlikely to Procure a Lead-In-Fighter-Trainer (LIFT)

Retired Pakistan Air Force (PAF) Air Commodore Kaiser Tufail provided Quwa with insights as to why the PAF will rely on the K-8 for its advanced training regimen. | Read More

Paramount and Leonardo are competing against turboprop-powered close air support (CAS) aircraft, such as the Embraer-Sierra Nevada A-29 Super Tucano (and others). In fact, when it had revealed the M-345 in 2017, Leonardo stated that the lifecycle costs of the M-345 would be at-par with turboprop alternatives, yet it would fly faster, higher and farther. Collaborating with Paramount Group to weaponize the M-345 is a clear step towards marketing the M-345 as an alternative CAS platform to the Super Tucano et. al.

The SWIFT is not tied to the M-345. Paramount is offering the SWIFT as a solution for other platforms, and that includes the K-8 Karakorum. Granted, Pakistan has lowered the intensity of its counterinsurgency and counter-terrorism operations in recent years. However, as a contingency as well as upgrade-route for the K-8, the integration of the SWIFT – or alternative system – could be a viable route.

Besides providing CAS in low-intensity or asymmetrical operations, a SWIFT-equipped K-8 could also help train future pilots for precision-guided ground-attack missions. The K-8s are aging, so an extensive service-life extension program (SLEP) modelled on Aero Vodochody’s L-39NG (i.e. overhauling or replacing the K-8’s engine, restoring the airframe and integrating new electronics) could be prudent.