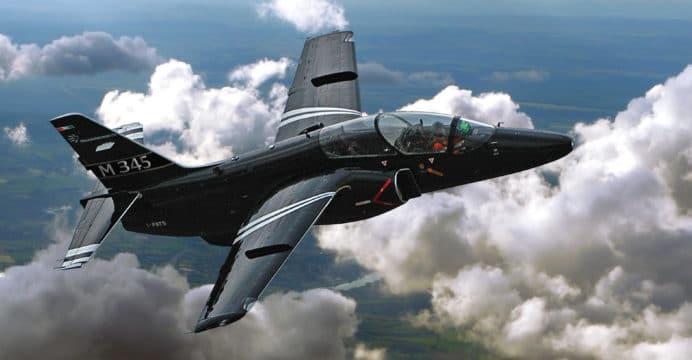 The Italian defence giant Leonardo told IHS Jane’s that it is positioning the revived M-345 High Efficiency Trainer (HET) as a jet-powered alternative to turboprop trainers.

Citing sufficiently close performance parameters in speed and maneuverability balanced with lower flying costs, modern turboprops, such as the Embraer EMB-314 Super Tucano, have been positioned in recent years by the industry as natural successors to legacy jet trainers, such as the T-37 Tweet.

In many air forces, including the U.S. Air Forces, pilots begin flight training on turboprops, and upon completion, transition to jet-powered (and in some cases, supersonic) lead-in fighter-trainers (LIFT). From there, pilots would undertake conversion training for their respective operational platforms.

Leonardo believes that the M-345 HET should offer comparable acquisition and operational costs as the EMB-314 Super Tucano, T-6 Texan II and others in the flight training phase, but with superior flight performance characteristics thanks to its Williams FJ44-4M-34 turbofan engine.

Upon its maiden test flight in January, Leonardo stated that the M-345 will provide “global air forces with an economically affordable and effective solution, thanks to a significant reduction in acquisition and life-cycle costs compared with those of powerful turboprop trainer aircraft.”

The M-345 HET is capable of a maximum speed of 777 km/h at 6,096 m and a ferry range of 1,410 km without external fuel tanks. Leonardo claims that the M-345 HET is “ideally-suited to the entire training syllabus, from basic to advanced training missions.”

Besides basic and intermediate flight training, Leonardo may be marketing the M-345 HET as a low-cost fighter conversion trainer as well, though it also offers the M-346 Master for the LIFT role.

Leonardo is not alone in pitching new-generation jet trainers. The Czech Republic’s Aero Vodochody is also marketing its L-39NG as an affordable turboprop alternative, and like the M-345 HET, the L-39NG is powered by a Williams FJ44-4M.

Leonardo and Aero Vodochody should have several major opportunities in the coming years. First, there is a large market of air arms operating legacy L-39s, with many major users in Central Asia, East Asia, Central and Eastern Europe, and the Middle East. Second, existing turboprop users – such as Pilatus PC-9 users from the 1980s and 1990s – are also on Leonardo’s roadmap for the M-345 HET.

Pakistan might be another prospective market. The Pakistan Air Force (PAF) operates a fleet of aging T-37 Tweets and has purportedly been in talks with Turkish Aerospace Industries (TAI) for the Hürkuş. The PAF had also studied LIFT platforms in 2015, though it balked from the idea due to the high procurement and operational costs of available options, such as the Korea Aerospace Industries (TAI) T-50 Golden Eagle. As an alternative to importing, the PAF could also return to the K-8 and fund an upgraded design akin to the L-39NG and M-345 HET. Pakistan Aeronautical Complex (PAC) and the Aviation Industry Corporation of China (AVIC) could present a ‘K-8 NG’ as a third next-generation jet-trainer option.