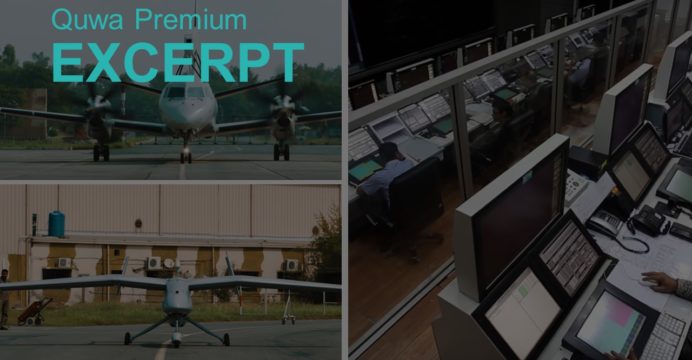 This article continues Quwa’s series on Pakistan’s anti-access and area-denial (A2/AD) options. The series builds on an observation that the Pakistan Navy (PN)’s efforts to expand its surface fleet, while a relatively significant effort, will not be enough to sustain credible sea-control capabilities in the Arabian Sea.

Combined, these domains aim to enable the A2/AD user to have a comprehensive insight or view of its areas-of-interest as well as the means to promptly identify and engage intruding targets. Prior to the PN’s surface and sub-surface fleet development, Pakistan had already been building ISR capabilities in each of these domains a decade, if not longer, in advance of current events.

In fact, the Pakistan Air Force (PAF) had touted its build-up of ISR as an integral feature to its counter-terrorism (CT) and counterinsurgency (COIN) efforts. However, the ISR domains necessary for A2/AD are significantly more expansive and Pakistan is now staging its efforts to materializing the required inputs. In fact, the drive, especially in terms of strategic awareness, is being channelled through domestic projects.

ISR is Relevant to A2/AD

ISR is integral to A2/AD. In the absence of ISR, Pakistan would not have the means to monitor its area of interest nor the means to effectively engage intruding warships. Fundamentally, A2/AD cannot happen at the hands of a power that is strategically and tactically blind. For example, even a supersonic ASCM would functionally be useless if one does not possess OTH detection and targeting capabilities.

There are three aspects to examine in terms of ISR. First, the ‘passive’ element wherein strategic ISR assets – e.g. imaging intelligence (IMINT) satellites and electronic intelligence (ELINT) systems – provide A2/AD users the means to observe their adversaries’ movements, be in terms of areas of interest or beyond. The information gleaned from IMINT or ELINT need not be confined to A2/AD, but in identifying potential gaps or vulnerabilities that can be exploited for one’s own offensive maneuvers. Second, the ‘active’ element concerns immediate targeting and engagement, e.g. using a radar to guide an ASCM.

The Pakistan Navy is building a balanced surface fleet centered on four Type 054A frigates along with lighter surface combatants to fulfill a range of complementary roles. | Read More

The third aspect is defensibility, i.e. the integrity of one’s ISR in response to an opposing electronic warfare (EW) or suppression/destruction of enemy air defence (SEAD/DEAD) effort. Sustained efforts in this regard would, by consequence of eroding ISR, erode one’s A2/AD capabilities by weakening the awareness and targeting capabilities. In this respect, shielding (or creating redundancies) is also an essential area of ISR.

This article will examine Pakistan’s ISR efforts in the context of the three aforementioned domains – i.e. long-range targeting, tactical situational awareness and strategic awareness. To observers, it should be of interest how the strategic awareness element is being aligned with domestic production.

However, the ISR element – especially at the strategic awareness level – is also a work-in-progress wherein a number of critical assets, such as space infrastructure, are still in development…