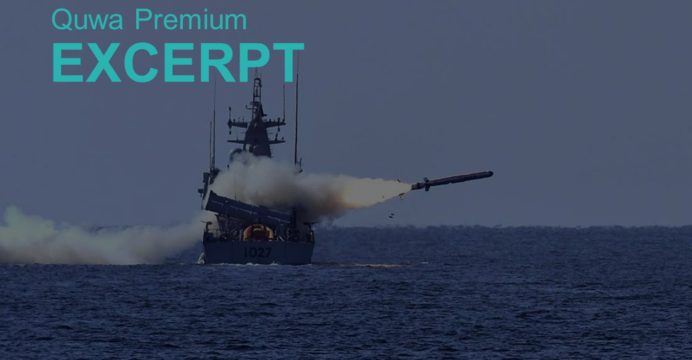 In an analysis of the Pakistan Navy’s plans to expand its surface fleet (most notably through the purchase of four Type 054A multi-mission frigates from China), Quwa concluded that the effort – though poised to relatively improve the Pakistan Navy (PN) fleet – is likely to be insufficient for building credible sea-control capabilities for blocking the sea-lines-of-communication (SLOC) that India relies on from the Arabian Sea.

Though the A2/AD effort betrays the reality of Pakistan’s economic – notably its fiscal – limitations, it need not be a non-factor in shaping the naval security dynamics between India or Pakistan. Indeed, the inability to muster enough assets for total sea-control does not necessarily mean losing the ability to deter naval activity along one’s own maritime constraints (i.e. the SLOCs affecting Karachi and Gwadar).

In fact, the PN’s ability to construct a credible A2/AD profile, at least in terms of having the right suppliers, has not been better. Firstly, the Chinese have succeeded in developing a spate of long-range munitions, including two supersonic-cruising ASCM designs – i.e. the CM-302 and CX-1 – that are now available for export, albeit under the Missile Technology Control Regime’s (MTCR) 300 km range restriction. Secondly, the PN can procure contemporary deployment platforms from its suppliers, be it China or Turkey.

In terms of deployment platforms, the forthcoming FAC project – i.e. FAC-55 – under Turkey’s Savunma Teknolojileri Mühendislik ve Ticaret AŞ (STM) stewardship is notably interesting. Unveiled during the 2016 International Defence Exhibition and Seminar (IDEAS) in Karachi, Pakistan, the FAC-55 is a 535-ton design capable of reaching a top speed of 55 knots.[1] In comparison, the PN’s Azmat-class FAC has a top speed of 30 knots.[2] Besides a faster top speed, the FAC-55 evidently exhibits better concealment and reduction of its radar cross-section (RCS), thus making it a stealthier FAC design than the Azmat-class FAC.

The PN could have the option of combining the two – i.e. FAC-55 FAC and CM-302 ASCM – to significantly bolster its A2/AD capabilities such that it can credibly deter unwanted surface vessel activity in Pakistan’s excusive economic zone (EEZ) and SLOCs. Granted, the option would not be a low-cost route in absolute terms, but the relative gains could greatly outweigh the costs, thus making the deal a plausible outcome.