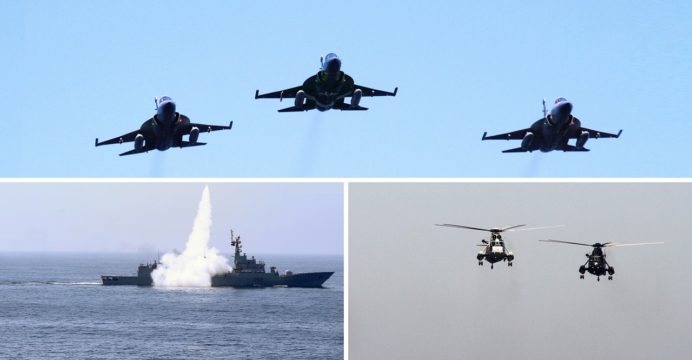 On 06 March, the Pakistan Navy (PN) and the Pakistan Air Force (PAF) concluded their joint-exercise in the North Arabian Sea – RIBAT 2018. The exercise took place from 24 February with the objective of validating “war fighting concepts under evolving multi-faceted threats”.

According to Inter Services Public Relations (ISPR), RIBAT-2018 also sought to “enhance interoperability between naval and air assets”. On the penultimate day of RIBAT-2018, the PN and PAF conducted C-802/C-802AK anti-ship missile (AShM) firing-tests from the F-22P frigate and JF-17 fighter, respectively. The ISPR stated that the test validated the “desired synergy between the two services”.

The test-firings during RIBAT-2018 confirm that the PAF’s JF-17s have been tested, qualified and equipped to deploy the C-802AK sub-sonic-cruising AShM. Promotional material by the PAF show that the JF-17 can be equipped with two C-802 AShM with one centerline fuel-pod, two SD-10 beyond-visual range air-to-air missiles (BVRAAM) and two PL-5EII within-visual-range air-to-air missiles (WVRAAM). 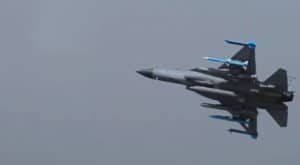 In 2016, the PAF converted its No. 2 Squadron at Masroor Air Base (Karachi) from the F-7P to the JF-17. In addition to supplanting an older fighter, the conversion also spread the task of deploying AShMs to two squadrons in the 32 Tactical Wing. Previously, the 32 Tactical Wing solely relied on the Thales Agave radar-equipped Mirage 5PA3 (inducted in 1983) and AM39 Exocet AShM for the anti-shipping role.

Combined with the ZDK03-based Karakoram Eagle airborne early warning and control (AEW&C) aircraft, the JF-17 is also a network-enabled asset, i.e. extended situational awareness using an AEW&C’s radar-feed through a data-link system, which it can rely upon to better utilize BVRAAM and AShM.

The Karakoram Eagle also factors into the PN’s plans, providing an over-the-horizon radar for extended-range situational awareness and targeting for its ships. This is particularly important as the PN has opted to deploy long-range AShM – such as the Harba – from the Azmat-class fast attack craft (FAC), which does not possess a surveillance and targeting radar to guide such munitions. The PN may potentially utilize the PAF’s AEW&Cs to enable FACs to effectively guide the Harba and other AShM at long-range.

Alternatively, the PN could also look to relying on the Type 366 OTH radar integrated to the Type 054A frigate (of which one is reportedly on order by the PN, with an option for an additional two).

For the PN, which lacks a credible medium-to-long-range anti-air warfare (AAW) element from its surface fleet, the air support provided by the PAF is essential for cover against aerial threats from the Indian Navy and Indian Air Force. RIBAT-2018 contributes to building interoperability between the two service arms, reviewed in greater detail in the Quwa Premium article, “RIBAT-2018: Improving PAF-PN Interoperability” with relevant technical touchpoints on using airborne sensors to guide missiles and AShM options.