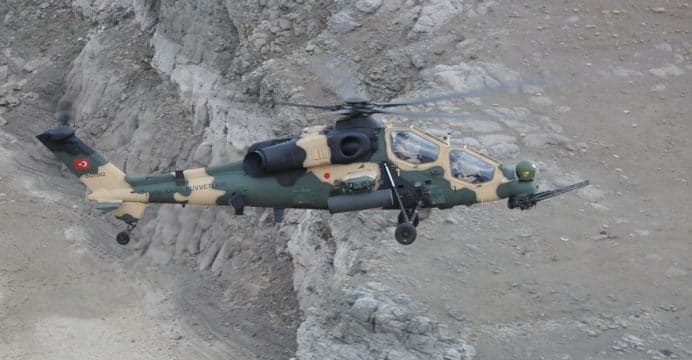 Turkish Aerospace Industries (TAI) is looking to build upon the interest its products, most notably the T129 attack helicopter and Anka unmanned aerial vehicle (UAV), at the 2018 Singapore Air Show.

TAI Vice President for Corporate Marketing and Communications, Tamer Ozmen, told journalists that the company is nearing a signature on a prospective sale of 30 T129s to Pakistan. He also stated that TAI is in “advanced discussions” for selling the T129 to Bangladesh, Philippines and Thailand.

Regarding Pakistan, Ozmen confirmed that the T129 was selected due to its performance in hot-and-high conditions. In August 2017, another TAI official said that the T129 possessed competitive life-cycle costs.

TAI is now embarking on expanding its business activities to other markets, especially in Southeast Asia.

Bangladesh has emerged as a market of interest. Dhaka is reportedly interested in the T129 and Anka UAV – a request-for-proposals has already been released for medium-altitude long-endurance (MALE) UAVs.

In January, TAI signed an agreement with PT Dirgantara Indonesia (PTDI) to support the latter’s MALE UAV program. PTDI has proposed a stopgap – ahead of an indigenous platform – based on the TAI Anka. Prior to the UAV agreement, TAI also agreed to provide support for the PTDI N219 utility aircraft.

With a stated requirement for 23 new attack helicopters, the Philippines has also emerged as a potential T129 buyer. Being a AW159 operator, the T129 would make for a natural fit for the Philippines as it would enable for engine commonality between two different platforms.

Thailand also has a requirement for new attack helicopters, with the T129 being in contention. Thailand, like Pakistan, is also a customer of big-ticket Chinese weapons, such as conventional submarines. Through the T129 and Anka, Turkey could find itself providing for a niche in close air support (CAS) weapons.