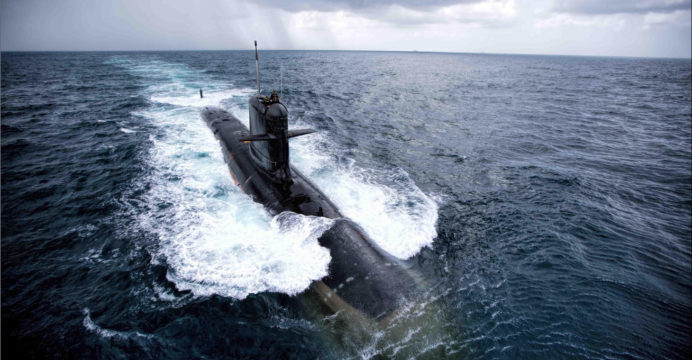 The INS Kalvari is the first SSK to join the Indian Navy since 2000.

The INS Kalvari is the lead ship of the Project 75 program, which led to New Delhi’s order for six Scorpene SSKs from French shipbuilder DCNS in 2005. Under P75, the Kalvari-class submarines were to be built in India by Mazagon Dock Shipbuilders Limited (MDL) through technology transfers from Naval Group.

Construction of the INS Kalvari began in May 2009. It was floated in October 2015 and launched for sea trials in May 2016. In March 2017, the INS Kalvari had test-fired the MBDA SM39 Exocet anti-ship missile (AShM) and in May 2017, it test-fired an unidentified heavyweight torpedo.

The second ship, INS Khanderi, was also launched for sea trials in January 2017.

The Kalvari-class is equipped with six 533 mm torpedo tubes for a payload of up to 18 AShM and/or heavyweight torpedoes. In its official press-release, Naval Group states, “The Scorpene is a 2000 tons conventional-propulsion submarine designed and developed … for all types of mission, such as surface vessel warfare, anti-submarine warfare, long-range strikes, special operations or intelligence gathering.”

The Indian Navy intends to induct the remaining five Kalvari-class SSKs by 2020.

India had intended to have the Kalvari-class SSKs equipped with air-independent propulsion (AIP) systems by first equipping the last two Project 75 submarines with fuel-cell AIP modules developed by the Defence Research and Development Organization (DRDO). This did not materialize. However, in September 2016 the Indian Navy reportedly (via The Hindu) outlined that the Kalvari-class will be retrofitted with an Indian AIP system as part of a refit program in the future.

However, the Indian Navy’s long-term aspirations are to build an offensively capable sub-surface fleet. To complement the P75 submarines, New Delhi released a Request-for-Information (RFI) for Project 75I for six new-generation AIP-equipped submarines. This is to be additionally joined by another six submarines under Project 76. Speaking to Hindustan Times, a senior Indian Navy officer laid out a roadmap for a total of “18 new conventional submarines and six nuclear-powered boats.”

MDL and Naval Group are hopeful of securing a follow-on order for three additional Scorpene/Kalvari-class submarines from the Indian Navy. In light of DCNS’ information leak in 2016, it is unclear if New Delhi is willing to expand upon the order, especially with P75I in the pipeline. However, India’s investment in the Scorpene thus far – from maintenance and training infrastructure in the Indian Navy to the industrial link with MDL – enables it to expand the Kalvari-class SSK fleet with relative ease. Factors such as cost, the complexity and timeline of P75I and near-term necessity (and MDL’s ability to meet it) would have to be examined by New Delhi before committing (or declining) a follow-on Scorpene acquisition.