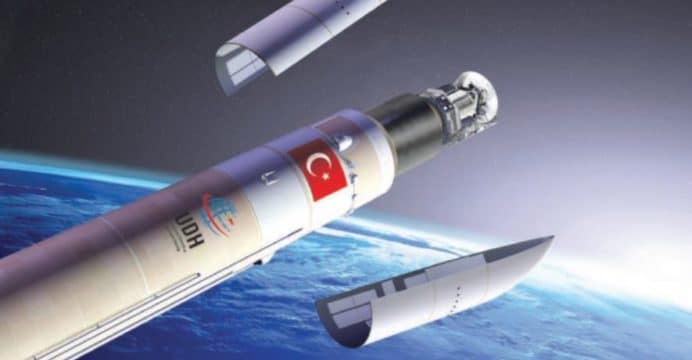 The Turkish Ministry of Transport, Maritime Affairs and Communications is reportedly preparing to launch a national satellite launch vehicle (SLV) program in 2018.

According to the Daily Sabah and Anadolu Agency, the Space Probe Rocket and Launch System (BURAK) program aims to end Turkey’s reliance on foreign SLV providers. Turkey is already undertaking domestic satellite development and production through the TÜRKSAT-6A program.

The BURAK is expected to be undertaken in line with Turkey’s broader 2023 objectives, which also include flying a domestically made 5th-generation fighter (TFX), launching a helicopter carrier and other goals.

As with its other marquee and strategic programs, Turkey is expected to collaborate with an experienced overseas partner to bring the BURAK into fruition. Turkey signed an agreement with the Japan Aerospace Exploration Agency (JAXA) to test materials developed in Turkey on the Japanese Experiment Module (KIBO) on the International Space Station (ISS).

Turkey’s space development ambitions include the deployment of both military and commercial satellites.

Turkish Aerospace Industries (TAI) is leading the development and production of the TÜRKSAT-6A satellite communication (SATCOM) system. The TÜRKSAT-6A, which is scheduled for launch in 2020, will comprise of 20 Ku-band and two X-band transponders, with the latter for military usage.

In September, TAI also announced the development of lightweight geosynchronous equatorial orbit (GEO) SATCOM satellites. Weighing one-ton, the GEO satellite will use 22 transponders. TAI is positioning it for commercial purposes for domestic and overseas markets.

Specific parameters of the BURAK SLV program, such as payload capacity, are not known.

The BURAK will not be a factor for the four-ton TÜRKSAT-6A, which is due to launch before the 2023 target date for the BURAK. It is possible that Turkey is aiming to pair the one-ton GEO satellite with the BURAK SLV to provide a turnkey satellite design, development and launch program for the commercial market.