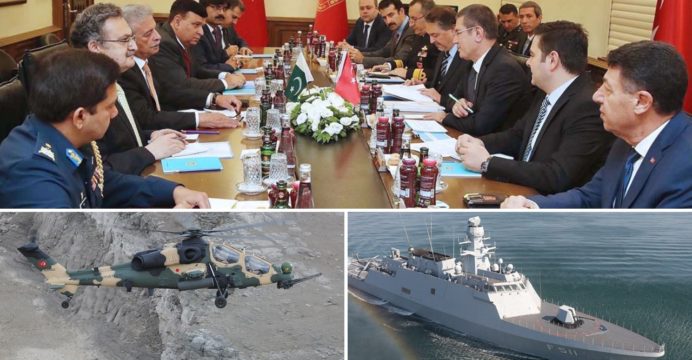 According to a press release from Pakistan’s Embassy to Ankara, the MoDP and his Turkish counterpart conducted a “comprehensive review of bilateral cooperation, particularly the ongoing defence industry projects between the two countries,” in which they agreed “that the growing level of bilateral cooperation was consistent with the vision of the leaders on both sides.”

The statement added that both sides “agreed to further increase mutual contact and exchange of visits with a view to realizing the full potential in defence collaboration and identifying new projects.”

Regarding the ATAK, Hussain said, “It is in the pipeline … [the process is] 90 percent complete,” and that the matter proceeded to financial proposals, which are being examined by Pakistan.

As for the MILGEM, the MoDP said, “The process is completed and construction of the ship will start in the near future,” adding, “Technical and financial proposal was going to be open (sic) in Pakistan on Monday.” Two of the four ships will be constructed at Karachi Shipyard & Engineering Works (KSEW).

The MoDP also touched upon the Turkish Air Force’s (TuAF) order of 52 Super Mushshak screening trainers from Pakistan Aeronautical Complex (PAC), the contract for which was signed in May.

PAC also offered the JF-17 Thunder multi-role fighter to Turkey. Hussain states that Turkey is “considering this aircraft [JF-17], because they know in detail about this aircraft.” PAC produces the JF-17 in partnership with the Aviation Industry Corporation of China.

Pakistan is among the Turkish defence industry’s prospective key markets. The electronics manufacturer Aselsan is supplying ASELPOD targeting pods for use on the JF-17 Thunder, software defined radios and electronic support measure (ESM) systems. Havelsan supplied Pakistan with various simulator systems, and it will also integrate its naval combat management system to Pakistan’s Agosta 90B submarines.

The defence contractor Savunma Teknolojileri Mühendislik ve Ticaret A.Ş. (STM) is the prime contractor managing the 17,000-ton Pakistan Navy Fleet Tanker (PNFT) and Agosta 90B upgrade programs at KSEW. STM is also providing port design and hydrographic/oceanographic survey services to Pakistan. In 2016, STM had hoped to extend its work with Pakistan to long-term programs, most notably the MILGEM, mini-diesel electric submarine (to replace the Cosmos MG110) and fast attack craft.

Based on the MoDP’s recent statements, the next marquee project involving STM will be the procurement of four MILGEM ships for the Pakistan Navy (PN). In May, STM CEO Davut Yilmaz had told Anadolu Agency that the ships would be a variant of the Ada corvette incorporating subsystems from Pakistan. The overall value of the program would be roughly $1 billion U.S. Pakistan signed a letter-of-intent to procure the vessels in May during the 2017 International Defence Exhibition and Fair in Istanbul.

The 2,300-ton MILGEM Ada corvette was designed for anti-submarine warfare (ASW). It is armed with two triple ASW torpedo tubes and sensors for surface and sub-surface situational awareness, two quad-cell launchers for anti-ship missiles (AShM), one 76-mm main gun, two stabilized weapon turrets and one Rolling Airframe Missile point-defence missile system. Specific configuration plans for the PN’s ships have not yet been revealed. Other MILGEM designs include the I-Class frigate and LF-2400 light frigate.

The sale of 30 TAI T129 ATAK attack helicopters to Pakistan is another key area of interest. The prospective purchase, which is said to be valued at $1.5 billion U.S., is being negotiated by both sides. Pakistan chose the T129 for its ‘plus-one’ attack helicopter requirement to complement the Bell Helicopter AH-1Z Viper, of which 12 are on order (of a possible sale of 15). In turn, TAI has extended offset opportunities to PAC which would see PAC undertake final assembly and supply components to TAI (Alan Warnes).

Collectively, the ATAK and MILGEM programs will provide Aselsan, Havelsan and Roketsan opportunities to expand their business activities in Pakistan. Aselsan and Havelsan are electronics suppliers for the ATAK and MILGEM, providing hardware such as sensors, combat management systems, ESM, communications systems and self-protection suites. Roketsan is a munitions supplier, its UMTAS and CİRİT are the mainstay guided weapons of the T129. Roketsan is also developing the Atmaca AShM for the MILGEM, while Aselsan recently revealed the ORKA lightweight ASW torpedo.

It would be in Pakistan’s interest to tie as many of these contracts to its domestic industry, which would channel the expenditure through the local economy. This could take place through partnerships between Aselsan et. al and their Pakistani counterparts, mirroring ventures such as Kazakhstan Aselsan Engineering wherein new and jointly-owned facilities are raised to manufacture various systems for domestic use and third-party exports. In terms of the latter, Pakistani companies would have the chance to connect themselves to Turkey’s industry efforts in Southeast Asia and the Middle East.