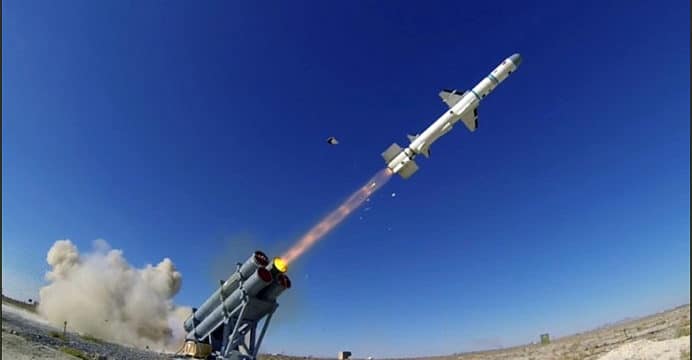 “We are all closely following the Atmaca project and the first shots are being made and next year we will be shooting on the ship’s platform and we aim to make the Atmaca guided missile we plan to replace Harpoon as a [missile] with superior capability, long range, superior capabilities than Harpoon,” said Çakır.

The Atmaca is similar in capability to the Exocet, C-802 and Harpoon. The Atmaca AShM weighs 800 kg with a 200-kg warhead. It can travel at subsonic speed and can reach a range of up to 200 km. The guidance suite comprises of a INS/GPS system with a terminal-stage active radar-homing (ARH) seeker.

TRT Haber reports that serial production of the Atmaca is scheduled to begin in 2018. The Atmaca will be deployed from the Turkish Navy’s MILGEM Ada-class corvettes and G-Class frigates.

With Turkey’s aim to supplant the Harpoon, the Atmaca should make its way to other surface platforms (e.g. fast attack crafts) as well as aircraft and submarines. The provision of the Kale 3500 will also give the Turkish industry the means to fully-source its stand-off range missiles (i.e. Atmaca and SOM).

Turkey’s aim is to localize the supply of all major munitions, including air-to-air, air-to-surface, surface-to-air and sub-surface solutions. Solutions include the Atmaca, SOM, HİSAR, BORA, Orka and Akya, Mizrak, Merlin and Peregrine, among others. Many of these weapons on display at the 2017 International Defence Industry Fair (IDEF), which took place in May in Istanbul.