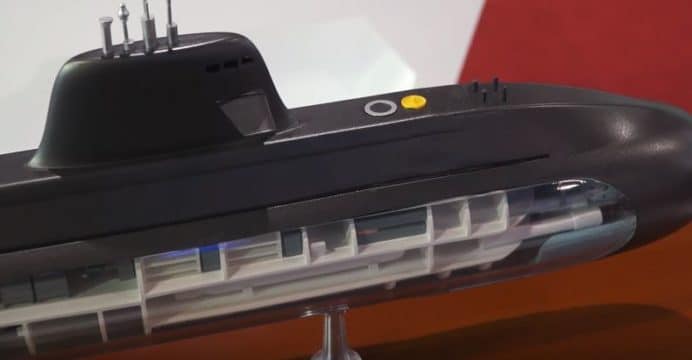 China Shipbuilding Industry Corporation (CSIC) revealed three new conventional submarine models, each with a single-hull structure and teardrop-design, at Defense and Security defence exhibition, which took place from November 6 to 9 in Bangkok, Thailand.

Joining the S20 and S26 double-hull models, CSIC’s new designs are the MS200 miniature submarine and the S600 and S1100 conventional attack submarines (Navy Recognition). The S600 and S1100 are also available with optional air-independent propulsion (AIP), enabling these submarines to operate undersea without snorkeling for oxygen, potentially for up to several weeks depending on the AIP system.

The most notable aspect of the S1100 and S600 compared to the S26 and S20 is that the former are single-hull designs, which depart from the double-hull staple that has traditionally informed Chinese submarine design. These single-hull designs are both lighter weight and potentially cheaper in thorough-life costs.

As a sub-1,000-ton design, the S600 – like the BMT Wyvern and Vidar-7 – can be an attractive low-cost submarine for navies seeking to cheaply raise new or augment existing submarine fleets. The S600 is fully capable of anti-submarine warfare (ASW) and anti-ship warfare (AShW).

However, unlike BMT, which had fused the asymmetrical qualities of a miniature submarine to its 700-ton attack submarine, CSIC seems to have opted to offer separate platforms for asymmetrical (e.g. frogmen) and conventional AShW/ASW. Though it is equipped with two torpedo tubes, the MS200 is likely geared for infiltration and deploying frogmen. In fact, the MS200 does not appear to have a dedicated tube for deploying swimmer delivery vehicles (SDV), which may suggest that at least one torpedo tube is required for SDV use. The Vidar-7 has a dedicated tube for SDVs in addition to four torpedo tubes.

CSIC’s recent reveal also poses new questions regarding Pakistan’s Hangor (II) AIP submarine program. While generally speculated to be a variant of the S26, neither Pakistan or CSIC have disclosed the specific make or model of the Hangor (II). The Pakistan Navy is expecting to receive its first of eight new submarines in 2022 (and all eight by 2028, with four to be built in Pakistan).

It is plausible that CSIC’s new designs are a factor in the Hangor (II) program. While the Agosta 70 and Agosta 90B are double-hull designs, the PN could look to a single-hull design as a means to cut long-term maintenance and operating costs, which could be a potential strain considering that the PN will operate a quantitatively large fleet. Moreover, the submerged range of the S1100 (with AIP) should credibly cover Pakistan’s exclusive economic zone (EEZ) of 350 nautical miles. Interestingly, compared Thailand’s AIP-equipped S26T design, the AIP-equipped S1100 has a slightly longer submerged ferry range (800 nm vs. 768 nm), though the S1100’s mixed range is substantially lower (3,000 nm vs. 8,000 nm).

However, there are potential drawbacks. Unlike the S20 and S26, the S600 and S1100 have fewer torpedo tubes (four vs. six) for heavyweight torpedoes and anti-ship missiles. Granted, the PN’s Khalid-class Agosta 90B is also equipped with four torpedo tubes, but an increase in individual payload would be a valuable gain to augment the overall fleet increase. On the other hand, one could speculate that there is a chance that CSIC has – or could design –  a larger single-hull model with six torpedo tubes.

The MS200 may also be of interest to Pakistan. In its 2015-2016 yearbook, Pakistan’s Ministry of Defence Production revealed that Karachi Shipyard & Engineering Works (KSEW) was given a target to construct a miniature submarine. Turkey’s Savunma Teknolojileri Mühendislik ve Ticaret A.Ş. (STM) had proposed co-developing a miniature submarine with KSEW to replace the PN’s Cosmos MG110. However, it is not known if the PN will proceed with the STM program or pursue an alternative, in which case, the MS200 is a plausible option. Besides providing a platform for SOF, the MS200’s two torpedo tubes may also provide anti-ship warfare capabilities suitable for anti-access and area-denial efforts in Pakistan’s littoral waters.