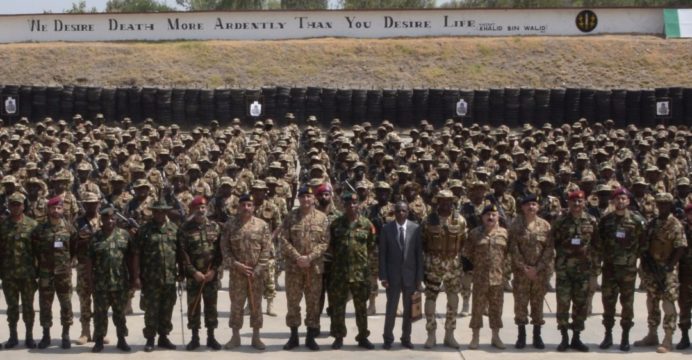 According to the Associated Press of Pakistan, the Nigerian contingent, which numbered at 440-strong with 26 officers, was trained in Tarbela, which is the SSG’s headquarters. The Pakistan Army Chief of Army Staff Gen. Qamar Javed Bajwa congratulated the group.

Pakistan has prided itself on the development of its counterinsurgency (COIN) capabilities, which had been built in response to the pressures of engaging in COIN operations in its restive northwest regions. In terms of infantry training, the Pakistan Army established the National Counter Terrorism Centre (NCTC) in 2014 in Khariyan Cantt. Since its forming, the NCTC trained more than 231,000 soldiers and 3,483 officers.

Due to inadequate training, equipment and doctrine on the part of Pakistan’s paramilitary and regular army for COIN pre-2010, the SSG had undertaken the mainstay of the armed forces’ ad hoc operations.

The Pakistan Air Force (PAF) has also established a COIN training arm at its Airpower Centre of Excellence (ACE), which will provide capacity building in aerial intelligence, surveillance and reconnaissance and close air support missions.

Pakistan has a burgeoning defence relationship with Nigeria. In August, the Nigerian Air Force (NAF) Chief of Air Staff (CAS) Air Marshal Sadique Abubakar requested Pakistan to assist in training Nigeria’s special operations forces (SOF). However, it had seemed that the NAF’s request was confined to its own SOF arm, which is relied upon to protect the NAF’s airfields and key installations. The reality of the Nigerian Army’s SOF arms training in Pakistan points to a deeper military-to-military relationship.

Besides training, Nigeria has also signed onto buying big-ticket defence hardware from Pakistan. In June, Nigeria inked a purchase of 10 Super Mushshak trainers from Pakistan Aeronautical Complex (PAC). This was to be accompanied by PAF training support at the NAF’s 310 Flying School. The NAF received its first bath of Super Mushshak trainers (temporarily drawn from existing PAC stocks until the NAF’s newly built aircraft are ready) in December. This was accompanied by a purchase of three JF-17 Thunder multi-role fighters from PAC, the acquisition of which had been budgeted in Nigeria’s 2016 fiscal budget.

Nigeria’s capacity building efforts are drawing from several suppliers. In April, the NAF formally inducted its first two (of 12) Mi-35M assault helicopters ordered from Russian Helicopters. The NAF is also closing in on a purchase – reportedly valued at $600 million U.S. – for 12 Embraer-Sierra Nevada Corp. A-29 Super Tucano attack aircraft. For Nigeria, and Sub-Saharan Africa in general, an acquisition spree of this scale is rare, with other heavier drivers of this growth being South Africa and Angola.