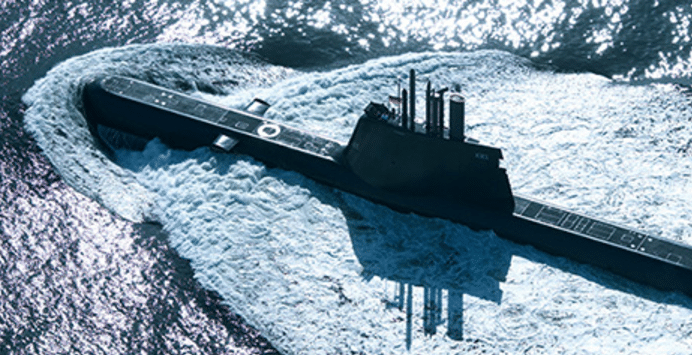 This follows an earlier push by Turkey’s Golcük Shipyard and TKMS to jointly market the Type 214 to the Indonesian Navy. Turkey is set to manufacture the Type 214 under license as the Reis-class, with six in the procurement pipeline of the Turkish Navy.

Turkey ordered the boats in a $2.7 billion U.S. deal. Under the workshare agreement, many of the Type 214’s subsystems will be sourced domestically from companies such as Aselsan and Havelsan.

Jakarta is in the process of modernizing its navy (TNI-AL). The TNI-AL has three Type 209 Chang Bogo-class diesel-electric submarines on order from South Korea’s Daewoo Shipbuilding & Marine Engineering.

The Type 214 is a development of the Type 209, but with updated subsystems and several design elements from the Type 212. Displacing 1,860 tons (underwater), the Type 214 can be configured with an optional fuel-cell based air-independent propulsion system. It has eight torpedo tubes for heavyweight torpedoes and anti-ship missiles.

If negotiations come to fruition, this would be Turkey’s largest naval export to-date – building upon a $1 billion sale of four MILGEM corvettes to Pakistan – and potentially its largest defence export overall. The sale could also benefit Aselsan and Havelsan as sub-system vendors. It would also mark a significant entry point for the Turkish defence industry in Southeast Asia.

The prime Turkish contractor, STM, is also working to develop its own submarine platforms, such as the x-TS1700 and a proposed mini-submarine for the Pakistan Navy.