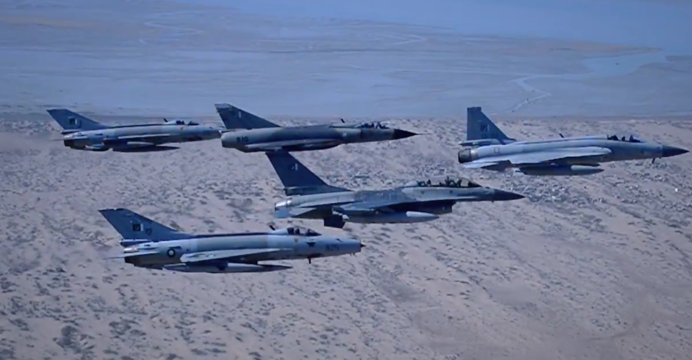 The Pakistan Air Force (PAF) has had an eventful year, though not one without major obstacles to its long-term development plans. Pakistan’s structural economic challenges require the PAF to make the most of the funding available. Unfortunately, India’s markedly strong air warfare development of recent years is fully independent of Pakistan’s economic fortunes, forcing the PAF to manage what is arguably the widest gap in terms of relevant technology and numbers (in comparison to the Army and Navy) between the two nuclear-armed neighbours. Nonetheless, important activities are in motion to help the PAF modernize its capabilities and, perhaps just as importantly, enable it to sustain itself in times of difficulty.

India’s near-USD $9 billion purchase of 36 Dassault Rafales is merely the tip of the proverbial iceberg in terms of the depth of the Indian Air Force (IAF)’s development efforts, but it is a representation of what the PAF has to consider in terms of the present and the future. Considering Pakistan’s economic capacity today and for the foreseeable future, parity in numbers and ‘technology in numbers’ is not possible, but building a sufficient defensive threshold could be possible.

The desire to build a defensive threshold is the driving force behind the JF-17 Thunder. Envisaged as a modern, low-cost, and capable lightweight multi-role fighter, the JF-17 is on track to forming the backbone of the PAF fighter fleet. As of December, Pakistan Aeronautical Complex (PAC) delivered 70 JF-17s to the PAF (i.e. 50 Block-I and 20 Block-II). Currently, these have been allocated to three frontline units – No. 2, No. 16, and No. 26 – as well as the Combat Commanders School. Replacing the Chengdu F-7P appears to be the PAF’s primary focus, so No. 14 and No. 18 could be next; the forthcoming two-seat JF-17B could be sought for No. 18, converting that F-7P operational conversion unit (OCU) into the JF-17’s OCU.

No. 2’s transition to the JF-17 is noteworthy in that it places the Thunder in the PAF’s maritime theatre. The JF-17’s beyond-visual-range (BVR) air-to-air capability and anti-ship warfare (AShW) capability via the SD-10 and C-802, respectively, are substantive improvements over the point-defence profile of the F-7P. This is especially true when taken in the context of the Karakoram Eagle (ZDK03) airborne early warning and control (AEW&C) system and Link-17 tactical data-link (TDL) system.

With the procurement of 16 Aselsan ASELPOD advanced targeting pods from Turkey, the PAF is working to configure its JF-17s for the ground-attack role. Semi-active laser-homing (SALH) air-to-ground bombs, specifically kits integrated onto Mk-8x series general purpose bombs (GPB), should be expected. The PAF could be planning to supplement the F-16s in counterinsurgency (COIN) strike operations.

At Air Show China 2016, the Nanjing Research Institute of Electronics Technology (NRIET) unveiled its KLJ-7A active electronically-scanned array (AESA) radar. Designed for the export market, the KLJ-7A has been viewed as a prospect for the forthcoming JF-17 Block-III, the Thunder’s first major platform upgrade. During the 2016 International Defence Exhibition and Seminar (IDEAS), which took place in Karachi during November, the Italian defence giant Leonardo showcased its Vixen-1000 AESA radar and Skyward infrared search and track (IRST) system – again, for the JF-17 Block-III. The PAF’s subsystem selections for the JF-17 Block-III are not yet known, though 2017-2018 should be a key year considering the expected lead time of integrating, testing, and clearing the new suite.

Currently, 150 JF-17s – divided between three blocks – are on the official procurement docket. With its eye on the future, PAF officials also told IHS Jane’s that the PAF is interested in the RD-33MK and WS-13 for the JF-17. PAF officials reportedly informed local media outlets that an additional 100 JF-17s (building a fleet of 250 fighters) are planned. These subsequent units, potentially designated Block-IV and Block-V, could be at the receive a new turbofan engine. With the Shenyang Aircraft Corporation (SAC)’s second FC-31 prototype possibly flying with a variant of the WS-13, the PAF has a chance at building commonality between its next-generation fighters, should it decide to procure the FC-31, which is not known.

To scale its existing F-16C/D Block-52+ infrastructure, the PAF also sought eight new-built F-16C/Ds from the U.S. While the sale was approved, the U.S. Congress did not approve of a Foreign Military Financing (FMF) component, which was to subsidize a portion (38-50%) of the proposed sale. Consequently, the PAF stepped away from the sale. Had matters gone as planned, the PAF would have likely sought to build its F-16 Block-52+ fleet to the originally sought 36 units, if not more. In lieu of these fighters, the PAF sought used and surplus fighters from third-party users, such as Jordan.

In terms of its older F-16s, the CEO of Turkish Aerospace Industries (TAI), Muharram Dörtkaşlı, told Defense News that the PAF had started discussing upgrade options with TAI. Dörtkaşlı said that the PAF has “additional modernization requirements, especially from the structural upgrade perspective.” He did not offer additional details, though the question of extending the F-16’s airframe life and new subsystems, such as an AESA radar, could be on the discussion docket (in light of emerging air warfare trends).

The inability to accessibly secure the F-16 has not changed the reality that the PAF could need a capable fighter platform to help manage the crucial years involving India’s forthcoming Rafale induction. While the F-16 Block-52+ is not the ideal platform for such an issue either, the prospect of potentially upgrading it to the AESA-equipped F-16V form might have offered breathing space. But with that not in the picture, reports had surfaced of the PAF seeking Chinese and Russian alternatives. In terms of the latter, the talk surrounding the Sukhoi Su-35 is well-known, though the PAF has yet to officially confirm the matter itself, and Russia is not officially entertaining the notion. That said, the Su-35 has been viewed as a potentially sound asset if procurable, especially for imbuing the PAF with long-range and long-endurance combat capabilities. This could be valuable for strike, air interdiction, and maritime missions.

The Chengdu J-10 – especially the J-10B/C – could be something of interest to the PAF, especially considering the prospect of fielding it as an AESA-equipped platform. The PAF has not voiced interest in the matter, but Italy and Spain did place their Eurofighter Typhoon Tranche 1 units on the market, drawing interest from several small air forces, such as Bulgaria. Considering the relatively cordial defence ties in place between Italy and Pakistan at this time, one wonders if this issue had been raised at one of the several top-level meetings between Italian and Pakistani officials. There are risks, not least from the supply channel of the Typhoon, which divides manufacturing work between four partners, each stationed in a different country. The Tranche 1 is also an antiquated model, and the PAF would be liable to spend on a bespoke upgrade (unique to the PAF) to bring it up to par. Thus, this is an unlikely option.

The aging F-16s, specifically the older Block-15 lot procured in the 1980s (though upgraded under the Mid-Life-Update program), are also a concern for the PAF. In this respect, Air Chief Marshal Sohail Aman had announced that the PAF is in the process of determining its next-generation fighter requirements. Besides supplanting the PAF’s aging F-16s, the next-generation fighter is to also help the PAF deepen its domestic supply channels – i.e. indigenization. To support the program, the PAF is establishing an aviation research, development, and industry site in the form of Kamra Aviation City. The purpose of Kamra Aviation City is to help build relevant human capital and competencies in the field. With the second SAC FC-31 prototype flying, the PAF may have a nearing platform available to it to help bring its requirements to fruition.

The PAF considers these exercises, especially multi-national ones overseas, as very valuable capacity-building avenues. The PAF concluded the year with High Mark, its full-service exercise, which is conducted once every five years. 2017 could see the PAF hosting its own multi-national exercises, such as Shaheen (which is traditionally conducted with the People’s Liberation Army Air Force) and Indus Viper (which has been done with Turkey).

To impart expertise and training and COIN-related air warfare, such as close air support (CAS) and time-sensitive strikes, the PAF established a new institution – the Airpower Centre of Excellence (ACE). The ground-breaking ceremony was conducted in February. When complete and operational, ACE will be open to domestic and overseas partners.

The Pakistan Ministry of Defence Production (MoDP) disclosed that the PAF ordered six LY-80 (i.e. HQ-16) medium-range surface-to-air missiles (SAM) in 2014-2015. The HQ-16 SAM has a maximum range of 40 km. This appears to have been a follow-on order to the three HQ-16 SAM systems and eight IBIS-150 radars bought in 2013-2014. Deliveries and integration may have commenced in 2016 and may potentially continue into 2017. In September, China unveiled an upgraded version of the HQ-16 with a range of 70 km. This could be something of interest to the PAF considering it would utilize the existing infrastructure investment put into the HQ-16 SAM program.

In May, Pakistan’s Prime Minister reportedly said that an air defence deal with China Precision Machinery Import and Export Corporation (CPMIEC) would be finalized once CPMIEC submits its proposal. The exact nature of this procurement is not known, but it does not appear to be related to the HQ-16 and FM-90 programs, which had been finalized in earlier years (as noted in the MoDP’s yearbooks). This has led some, including Quwa, to speculate that Pakistan could be seeking the HQ-9 long-range SAM, which is capable (in its export form, the FD-2000) of engaging targets at up to 125 km. Pakistan had sought the HQ-9 in earlier years, so renewed interest in the system would not be surprising.

In October, the Chairman of the Pakistani Senate’s Standing Committee on Defence, Lt. Gen (retired) Abdul Qayyum told the Associated Press of Pakistan that PAC led the effort to repair two damaged Saab 2000-based Erieye AEW&C aircraft. Three of Pakistan’s Erieye AEW&C came under attack from non-state assailants in August 2012. One was written-off as non-recoverable, but the remaining two were listed as damaged. One of the repaired units was flown at last year’s 23 March parade.

The PAF will consider it imperative to construct a modernization roadmap that provides it an adequate defensive threshold to discourage uninvited entries. Structural economic uncertainty will remain an issue; a crisis or slide in the next several years would have adverse impacts on the PAF’s modernization efforts.