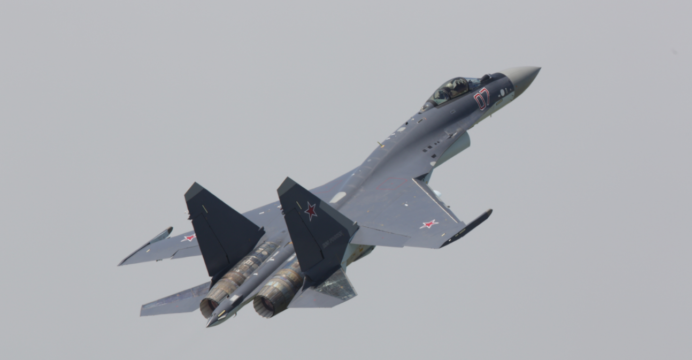 As per Antara News, Moscow and Jakarta are currently locked in discussions over the price for the eight aircraft, which are expected to replace the Indonesian Air Force (TNI-AU)’s Northrop F-5E Tiger IIs.

In addition to the aircraft, Indonesia is also seeking transfer-of-technology and co-production benefits.

The Su-35 is the latest iteration of the venerable Flanker-line developed and originally produced by Sukhoi. Following an industry reorganization effort, the Su-35 and its sibling variant the Su-30 are now produced by United Aircraft Corporation (UAC).

The Flanker-E honours its predecessors’ long-range (3,600 km) and high-payload (8,000 kg) characteristics, but it is configured with current-day subsystems, improved turbofan engines, and improved airframe.

The Irbis-E passive electronically-scanned array (PESA) radar can track targets with a radar cross-section (RCS) of 3m2 from up to 400 km. The Irbis-E can track up to 30 airborne targets and engage 8 at once.

During Indo-Defence 2016, which is Indonesia’s marquee defence exhibition, several aerospace vendors had pitched their respective offerings for the TNI-AU’s F-5E replacement program. At the time, Jakarta set the budget for the program at $1.5 billion U.S. for 16 aircraft.

Saab offered its JAS-39 Gripen, but with its Erieye airborne early warning and control (AEW&C) and strong network integration expertise in tandem.

UAC was slotted in a strong competitor with its Su-35 Flanker-E, which the Indonesian Ministry of Defence had sought as early as September 2015.

IHS Jane’s reports that Ryacudu justified the selection of the Su-35 because the TNI-AU had developed considerable familiarity with flying Russian combat aircraft, most notably the Su-27SK and Su-30MK.

Indonesia’s procurement strategy, at least in regards to the TNI-AU, has been one of diversity. While it is not pursuing the F-16V, the TNI-AU did procure 24 surplus F-16C/Ds from the U.S. as well as 16 T-50 Golden Eagle lead-in fighter-trainers from Korea Aerospace Industries (KAI).

In effect, Jakarta is not turning away from available U.S. equipment, it is embracing it, yet also balancing its suppliers such that it is not critically reliant on one. Whether this balancing act will preclude the TNI-AU from all Western fighters, or at least those reliant on critical American components (such as engines), remains to be seen.