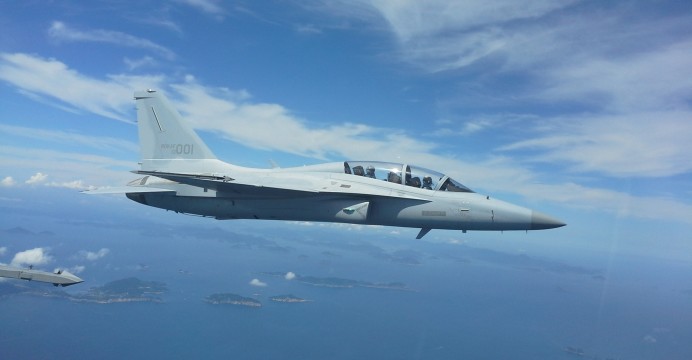 As part of Flight Plan 2028, the Philippine Air Force is looking to expand its airpower capabilities through the acquisition of another 36 Korea Aerospace Industries (KAI) FA-50 Golden Eagle lightweight fighters to add to its existing force of 12 aircraft (IHS Jane’s).

Speaking to IHS Jane’s, a Philippine Air Force official described the additional FA-50 purchase as a means to build the force’s capacity to mitigate threats along its exclusive economic zone (EEZ). The Philippines will also examine its multi-role fighter options; a requirement Saab is hopeful to secure with its Gripen.

At this stage, the notion of another 36 KAI FA-50s is interesting. As noted in an earlier article on Quwa, the FA-50 is essentially a lightweight fighter, one comparable to the Hindustan Aeronautics Limited (HAL) Tejas, Saab JAS-39C/D Gripen, and Pakistan Aeronautical Complex (PAC) and CATIC JF-17 Thunder. This may sound a bit disingenuous if taken in light of the KAI T-50 Golden Eagle, the lead-in fighter trainer (LIFT) derivative of the FA-50, but one need only examine the platform’s subsystems and physical parameters.

The Golden Eagle platform is powered by the General Electric F404 turbofan, which is also utilized by the Tejas and Gripen C/D. The FA-50’s payload comes in at 3,700 kg distributed across seven hardpoints, which is markedly close to the JF-17’s payload and weapons carriage capacity. Its onboard sensor suite is built on the Elta Systems EL/M-2032 mechanically-steered pulse-Doppler radar, which is also found on the HAL Tejas. A fully functional electronic warfare (EW) and electronic countermeasures (ECM) suite as well as tactical data-link (TDL) system basically renders the FA-50 as a fully capable fighter solution.

There are several key aspects to consider:

First, the Philippines’ plan to build-up its air defence capabilities through the FA-50. A fleet of close to 50 such lightweight fighters is a credible force in own right, though the actual impact, especially on the region’s defence and security dynamics, can best be measured by the air-to-air and air-to-surface munitions the Philippines pursues and secures for its FA-50s.

Fortunately for Manilla, the potential scope may be relatively wide considering that Israel, a major vendor of modern EW and ECM equipment, sensors, and a wide range of munitions, is seeking to expand its defence ties with the Philippines. The provision of the Elbit Display and Sight Helmet System (DASH), the Rafael Python 5 high off-boresight (HOBS) AAM, Derby BVRAAM, and SPICE precision-guided bomb (PGB) kit would certainly be welcome additions to the Philippine Air Force inventory.

Second, the defence industry environment in the Philippines is beginning to take a certain shape. Seeing Manilla fully commit to the FA-50 platform, it is clear that KAI will maintain a very strong footprint in the country. Inversely, the Philippines could leverage its comparatively lucrative fighter requirement to call for commercial offsets and some measure of technology transfer, which could support the Government Arsenal Defense Industrial Estate (GADIE) initiative, which aims to nurture a defence industry base in the Philippines. KAI’s willingness to engage in such activities (which is plausible considering its partnership to co-develop its next-generation fighter with Indonesia’s PTDI) will confer the company a strong client-user relationship in the country, which could have an impact on the Philippines’ future acquisitions.

Saab’s decision to open a marketing office in Manilla is a major move in terms of indicating its seriousness to sell the JAS-39 Gripen to the Philippines. However, from a cost standpoint, the Philippines should be able to build-out a credible and – at worst, marginally inferior – solution through FA-50s configured with Israeli air-to-air and air-to-surface munitions. While the Philippines Air Force stated that the multi-role fighter is a long-term factor, it should be noted that the capability delta likely expected from this platform is also substantively higher than that of the FA-50.

It would be surprising if the Philippine Air Force does not contemplate the procurement of a medium-weight platform for its multi-role fighter requirement. In this respect, Saab’s JAS-39E/F would be a very compelling solution. However, KAI’s current opportunity to build a very strong client-vendor relationship in the Philippines could generate competition for the Gripen Next Generation (NG), namely from KAI’s next-generation fighter platform, the KFX.

The Gripen NG and KAI KFX will confer the Philippine Air Force with a substantive capability boost above its FA-50 fleet. Moreover, the Gripen NG and KFX will be better positioned (thanks to greater range and heavier payload) to assume long-endurance and long-range air defence duties. A credible offensive element would also be in play, particularly through the KFX, which benefits from a low radar cross-section (RCS) airframe design and internal weapons bay. Alternatively, the Gripen NG is in the late stages of its development and will be available within Flight Plan 2028’s timeframe.