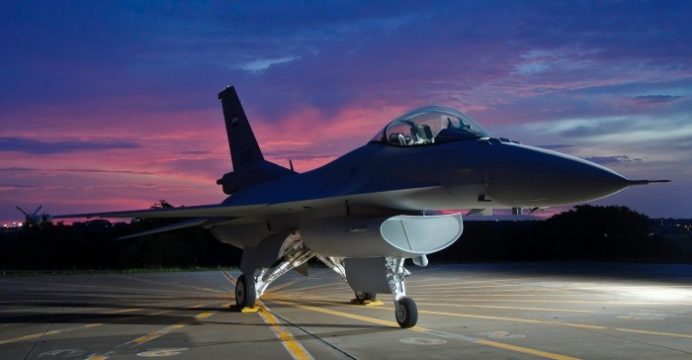 The White House has approved a series of big-ticket fighter sales to Qatar, Kuwait and Bahrain (Defense News). While Boeing stands to benefit the most through F-15SE and F/A-18E/F sales to Qatar and Kuwait, respectively, an F-16 sale to Bahrain could finally be Lockheed Martin’s ticket to keep its F-16 production line open for the next three to five years.

The F-16V is the latest iteration of the venerable F-16 Fighting Falcon series. Its primary addition (over the Block-50/52) is the AN/APG-83 active electronically-scanned array (AESA) radar.

Earlier in the year, Lockheed Martin had hinged its hopes on a proposed sale of eight F-16C/D Block-52 to Pakistan, but that fell through because of Congress’ refusal to approve of Foreign Military Financing (FMF) support to help subsidize the sale.

At the moment, the fighter sale proposals are underdoing informal review in Congress, but within 40 days, the State Department will release an official outline of the proposed contract.

Bloomberg is reporting that Bahrain could order 19 F-16V for $2.8 billion U.S. (this probably includes air-to-air and/or air-to-surface munitions alongside the requisite maintenance and logistics support package). An upgrade package for Bahrain’s existing 21 F-16C/Ds worth $1 billion is also reportedly on the docket.

If the sale is approved and inked, Bahrain would be the first user of new-built F-16Vs. The subsystem suite – which is centered on the AN/APG-83 AESA radar – would enable Bahrain to maintain technology parity with its Gulf Arab neighbours. Bahrain would also be the first F-16 user outside of East Asia to upgrade its F-16C/Ds to V-standards.

From an industry perspective, the sale provides Lockheed Martin with a short-term gain as well as a viable medium-term opportunity. Controversy notwithstanding, the Pakistan Air Force (PAF) will likely keep an eye on the prospect of additional new-built F-16s, and in light of India’s Rafale purchase, the F-16V could be an idea the PAF may seek to convert into a real option.

The F-16V is essentially the Block-50/52, but with a new radar and avionics suite. However, most of the aircraft’s maintenance and logistics infrastructure is already in place in Pakistan. With No. 5 squadron’s F-16C/Ds being the newest F-16s in PAF service, the possibility of an upgrade could be on the table. A squadron level F-16V purchase (16-18 jets) and an upgrade package for the existing C/Ds could provide the PAF with two AESA-equipped fighter squadrons within the medium-term.

However, such an upgrade will depend on the White House, Pentagon, and Congress. In other words, there are multiple layers of approval: The U.S. government has to determine if the F-16V is in line with its foreign interests in Pakistan and the wider region. The Pentagon would have to be comfortable with the notion of releasing sensitive technology – i.e. the AN/APG-83 – to Pakistan. The final layer, Congress, may as well be considered a hostile environment to Pakistan’s defence interests, one that could (and arguably has) played against White House interests (of using big-ticket hardware to strengthen influence within the Pakistani armed forces). Moreover, an increasing sense of disenchantment with U.S. foreign policy, especially in relation to India, may also draw skepticism (of an F-16 purchase) in Pakistan.