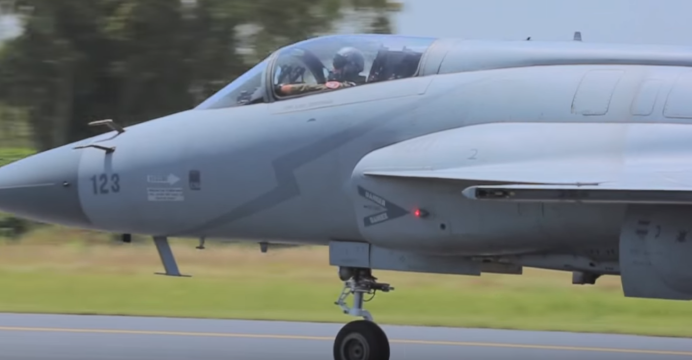 More than 200 defence vendors from 26 countries are showcasing their products at ADEX. In April, Azerbaijan’s Minister of Defence Industry had invited Pakistan to showcase the JF-17 Thunder, which is jointly produced by PAC and Chengdu Aircraft Industry Group (CAIG).

With Nigeria slotted to ink a deal in November for an unspecified (possibly an initial order of three) JF-17s, the Pakistan MoDP will certainly be looking to expand its sales portfolio for the fighter.

Azerbaijan has been listed as a prospective customer since 2011. The Azeri Air Force (AzAF) currently flies 13 MiG-29s, 11 Su-25s, and five MiG-21s. With a probable aim at the MiG-21s, PAC will likely be marketing the JF-17’s low acquisition costs and flexibility in weapons and subsystems configuration.

Besides the JF-17, the PAC Super Mushshak would be another product Pakistan will be eager to market and sell to Azerbaijan. In fact, the Super Mushshak has seen a spate of recent success in sales; Nigeria and Qatar have signed on, and Turkey is expected to place an order for 52 Super Mushshak in the near-term.

POF’s presence at ADEX 2016 is also an important factor for Pakistan. In fact, POF had registered $100 million U.S. in export sales for the year, and Azerbaijan is a viable small-arms and munitions market. But POF will face strong competition from Russian and Turkish vendors.

Analysis: Prospects of a JF-17 sale to Azerbaijan?

It is important to understand that the JF-17 is a big-ticket item in Pakistan’s defence exports portfolio. A sale with even minimal profits would still generate hundreds of millions of dollars in technical work for Pakistanis in the short-term, and long-term after sale support opportunities in the long-term.

It is not as popular as the Super Mushshak, but in the context of the MoDP’s goal of steering the Pakistani defence industry to self-sufficiency (i.e. reduced dependence on government subsidies), the JF-17’s market success is a key factor. Of course, it still not the principle objective, which is to provide the Pakistan Air Force (PAF) with an accessible backbone fighter. But for the MoDP, the commercial aspect is central.

Russia has a strong defence industry presence and vendor-user relationship with Azerbaijan. The entirety of the AzAF fighter fleet is comprised of Russian combat aircraft, and while the MiG-21 and Su-25 are old platforms, Moscow has every incentive to drive a Yak-130 sale to one – if not both – areas. Moreover, Russian munitions – such as the FAB-100 – are produced under license in Azerbaijan. Russia can leverage a large number of mechanisms, such as offsets, financing, and access to surplus stocks, to secure sales. It will not be easy for Pakistan (especially without Beijing’s backing) to displace this presence.