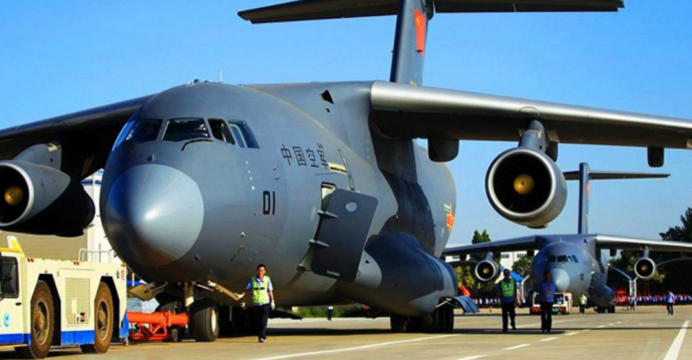 The People Liberation Army Air Force (PLAAF) has officially inducted the first of what could be 1000 Xian Aircraft Corporation (XAC) Y-20 heavy-lift transport aircraft this week.

With a maximum take-off weight of 200 tons and capacity to carry up to 66 tons in cargo, the Y-20 will form the workhorse of China’s strategic and long-range lift fleet.

According to IHS Jane’s, XAC received a level of design assistance from Russian as well as Ukrainian engineers, which in turn has given the Y-20 a number of visual similarities to the troubled Antonov An-70.

The XAC Y-20 has the characteristics of what could readily emerge as a capable and popular transport. For China, the Y-20 would be a major enabler for its ability to rapidly move military assets across its territory, and potentially beyond (for humanitarian and/or peacekeeping missions).

While the Y-20’s maximum payload capacity is shy of the C-17’s 77.5 tons, the depth of China’s domestic military and civil requirements (as well as the cost competitive nature of its industry) will help the Y-20 achieve a much more competitive price-point.

In June, AVIC’s head – Zhu Qian – indicated to China Daily that the conceptual work for an export variant of the Y-20 was already underway. If brought to fruition (likely), the Chinese would be in possession of an aptly capable IL-76 and A-400 competitor.

The Y-20 is currently powered by the Saturn DK-30KP, but indigenous turbofans – such as the WS-20 – are under development. It is also possible – if not likely – that the Y-20 will eventually be fitted to serve as an inflight refueling tanker (which could replace the PLAAF’s H-6Us).