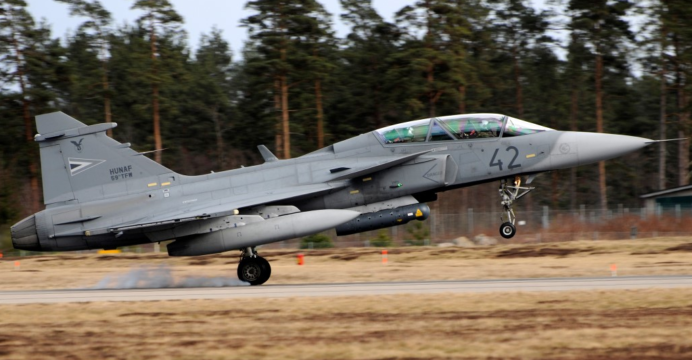 The Botswana Defence Force (BDF) leadership officially confirmed that Botswana is in negotiations with the Swedish government for the possible purchase of 8 to 12 Saab JAS-39C/D Gripen multi-role fighters.

The news was conveyed by Lt. Gen. Gaolathe Galebotswe, the commander of the BDF in an appearance before the Parliament of Botswana’s Public Accounts Committee (Defense News).

According to Galebotswe, the Gripen is being sought to replace the BDF’s aged Canadair-built Northrop CF-5 Tiger II fighters, which are increasingly becoming burdensome for the BDF to maintain and operate.

Fighters from the U.S. (F-16), Russia (likely MiG-29 and Su-30) and China (likely JF-17 and FC-20) were also evaluated, but the BDF felt that it could accrue the highest cost savings from the Gripen, which “was found to have the lowest operating costs” according to Galebotswe.

The cost of the Botswana Gripen deal could reach $1.7 billion U.S.

Although the matter has now been confirmed by both Sweden and Botswana, it seems that the process is still in its early stages. It is unclear if Botswana is pining to acquire used or new-built Gripens, but judging from the potential value of the contract, they will likely be new-built.

With its southern neighbour South Africa also operating the Gripen, Botswana may be able to benefit from some synergy in the form of a more localized training and maintenance support infrastructure. In addition, Botswana’s Gripens could potentially be armed with identical air-to-air and air-to-surface munitions too.

On the one hand, Botswana could potentially acquire advanced munitions (e.g. precision-strike bombs and high off-boresight air-to-air missiles) without the cost and regulatory hurdles typically associated with Western arms. On the other hand, South Africa could partially offset its integration and testing costs by selling munitions to Botswana.