Paramount and Boeing team up to arm the Mwari (AHRLAC)
February 18, 2020 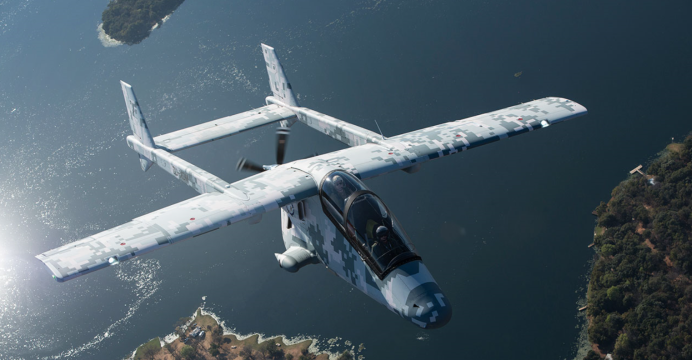 Paramount and Boeing team up to arm the Mwari (AHRLAC)

When we last took a look at the AHRLAC [Advanced High Performance Reconnaissance Light Aircraft], we saw an ultra-lightweight platform with considerable potential in the low-intensity conflict sphere. Well, it seems Boeing is eager to put that idea to the test. At the Global Aerospace Summit in Abu Dhabi, Boeing and Paramount Group (South Africa’s largest privately owned defence vendor) announced that they would jointly equip the AHRLAC with sub-systems for ISR [intelligence, surveillance, and reconnaissance] and light-attack missions.

Boeing’s interest in the AHRLAC seems to stem from its desire to build a comprehensive product portfolio. Jeffrey Johnson, an executive at Boeing Military Aircraft, said that the AHRLAC enables the company to access markets which it currently does not cater to, i.e. countries in need of comparatively low-cost and low-powered combat solutions. For Boeing, whose core military offerings center on cutting-edge combat aircraft such as the F/A-18 Super Hornet, F-15E Strike Eagle, AH-64D/E Apache, the AHRLAC could be an interesting route, but it seems Paramount Group will be taking the lead with the militarized AHRLAC, now known as the Mwari.

Ivor Ichikowitz, Paramount Group’s Executive Chairman, is taking aim at the helicopter market. To be fair, Ichikowitz is probably looking to compete against lightweight helicopters, such as Airbus’ H125 (aka AS555 Fennec), which is a fairly common light attack aircraft. The Mwari can take on a payload of 800kg, which could, at least theoretically, be equipped with a range of guided and unguided air-to-surface munitions. If viewed purely from the perspective of ISR and light-attack, the Mwari could be a very competitive option against the Fennec and its contemporaries.

A portion of the Mwari’s competitiveness will weigh on the development and availability of lightweight munitions. With Boeing in the mix, it would not be farfetched to imagine the Mwari being equipped with the AGM-114 Hellfire II, which is a widely adopted semi-active laser-homing (SALH) air-to-ground missile (AGM). With each Hellfire-II weighing 50kg, the Mwari should have no problem carrying these missiles on its external stores, of which it has six in total. The Hydra 70-based APKWS [Advanced Precision Kill Weapon System], a laser-guided rocket suite, could also be an option.

In addition to its heavier payload, the Mwari could also benefit from lightweight guided-bomb kits similar to the Boeing GBU-39 Small Diameter Bomb (SDB). While it is unlikely that Boeing would offer its SDB model with the Mwari, Paramount Group could (and should) consider alternatives. An SDB-like munition could have a warhead weighing 125kg, which in turn can be used to attack reinforced positions, whilst still abiding by the Mwari’s lightweight and low-intensity profile. Denel Dynamics should have the necessary expertise and technological base to develop such a solution (and it will probably offer the Mokopa and Ingwe as well).

With the Mwari’s potential combat capabilities in mind, as well as the reality that its performance in terms of range, service ceiling, and maximum speed are superior to that of the Fennec and its contemporaries, Paramount Group’s goal of competing against the lightweight helicopter market may not be an easy feat.

While light attack support is a role of the Fennec, it is not the only role. These helicopters are also light utility transport lifts, especially mountainous areas, where airstrips are rare. The potential superiority of the Mwari in its attack profile may not compensate for the multi-role capabilities afforded by the Fennec, MD-500, Ka-226, etc. Furthermore, these lightweight helicopters are already in use with dozens of countries, which enables the likes of Airbus et. al to utilize the existing maintenance and logistical infrastructure in these markets to push for additional orders.

Ultimately, the Mwari will be competing for the lightweight fixed-wing market, which is a very competitive space composed of a wide range of contenders, from jet fighters such as the JF-17 to turboprops such as the A-29 Super Tucano. Paramount Group would need to strongly emphasize the Mwari’s cost-effective nature, not only in terms of upfront acquisition costs, but long-term operational costs as well.

While Paramount Group understands this point, it needs to ensure that the final product (developed with Boeing) is perceived as affordable. If the cost – upfront or lifetime – is too high, prospective clients may prefer marginally more expensive (but more mature) solutions, such as the Super Tucano. These customers may even opt for armed unmanned aerial vehicles, such as the Denel Dynamics Seeker 400, which could be had for much less in terms of cost (albeit without the range and payload advantages of the Mwari).

Paramount Group was able to secure an unnamed launch customer. The Mwari is also – according to Ivor Ichikowitz – generating interest in the Middle East, Africa and Americas. If pushed purely from the angle of being the most affordable counterinsurgency (COIN) platform (relative to capability), the Mwari should be able to make credible in-roads, especially in Africa.