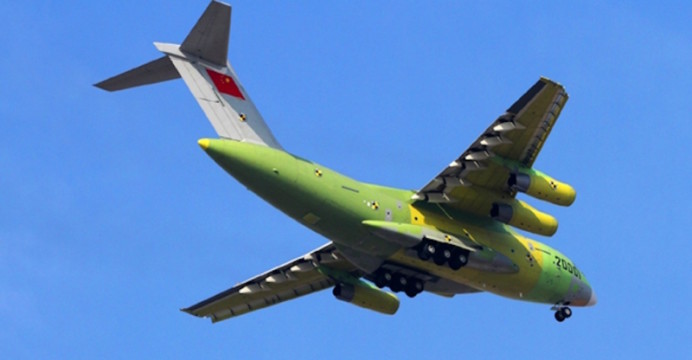 Named the “Kunpeng” (a giant bird in Chinese mythology), the Y-20 entered development in 2009, with the process taking three years. The Y-20 conducted its maiden flight in January 2013, and with its latest prototype flying in February 2016, the aircraft seems to be entering Initial Operational Clearance (IOC) by the end of this year. According to a U.S.-based analyst speaking to Defense News, the Y-20 is still a few years away from entering full-scale production.

The Y-20 Kunpeng is capable of lifting 60 tons, putting it above the Russian Ilyushin IL-76MD Candid (52 tons), but below that of the Boeing C-17 Globemaster III (77 tons). Powered by four Russian Saturn D-30KP turbofans, the Y-20 is capable of achieving a cruise speed of 918km/hour. If loaded to full capacity, the Y-20 can cover a range of more than 4500 km, comparable to the C-17.

The Saturn DK-30KP will eventually be replaced by the Shenyang WS-20, an indigenously developed and produced turbofan engine. The WS-20 uses the WS-10A fighter turbofan as its basis, which has been in production for use on the Shenyang J-11B (indigenized Su-27 Flanker). Alternative Chinese engines may also be integrated onto the Y-20, such as the AVIC Engine SF-A, a less advanced turbofan design (closer in comparability to the CFM International CFM56, used on the Airbus A320).

The Y-20 is expected to enter full-scale production in the 2020s, from which time it will gradually form the mainstay of the PLAAF’s heavy-lift cargo fleet. The incorporation of the WS-20 (or potentially another Chinese turbofan, such as the AVIC SF-A) could also position the Y-20 as a competitive export product. Studies to equip the Y-20 for airborne early warning and control (AEW&C) and maritime patrol aircraft (MPA) roles are also reportedly underway.

While there is little doubt that the PLAAF is (or eventually will) study using the Y-20 as a platform for use as an AEW&C and MPA, there are numerous other aircraft under development in China that could be just as appropriate for those roles, such as the AVIC MA700 turboprop airliner. It is possible that developing special mission versions of the Y-20 is an not urgent priority for the PLAAF.

That said, the one mission profile that the Y-20 may adopt (ahead of others) in addition to its role as a heavy air-lifter could be that of an in-flight refuelling (IFR) tanker, similar to the IL-78 Midas, which is the IFR variant of the IL-76 Candid. Y-20-based tankers could potentially be inducted in the 2020s to begin replacing the PLAAF’s HY-6Us, which are based on the early Cold War-era Tu-16 twin-engine jet bomber.

In terms of exportability, it is important to note that the Y-20 may be many years off from acquiring the necessary clearances from the Chinese government. Y-20 production will certainly be prioritized to meet the PLAAF’s needs; it could be the mid-to-late 2020s before the Y-20 is actively pushed for export. Once available, the Y-20 could give the Chinese a strong entry in the heavy-lift transport market, particularly in the area of users with ageing IL-76 and IL-78 airlifters.