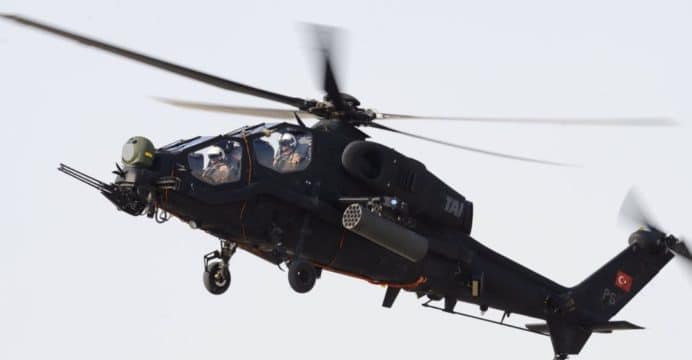 In a press conference on 06 January 2020, Turkey’s President of Defense Industries (SSB), Dr. Ismail Demir, stated that the Pakistan Army extended its delivery timeline for the T129 attack helicopter by one year.

Pakistan had ordered 30 T129 ATAK attack helicopters in 2018 for $1.5 billion US. In addition to the aircraft the package also included training, logistics, maintenance, and various munitions.

The SSB’s comments were a response the apparent uncertainty regarding the delivery of the ATAKs. This uncertainty was due to the US’ not yet releasing the export permits for the ATAK’s turboshaft engine, the LHTEC T800-4A, which falls under the International Traffic in Arms Regulations (ITAR) regulatory regime.

Since Turkey signed onto the Russian S-400 air defence system and, in turn, rebuffed Washington’s calls to walk away from that deal, US-Turkish defence industrial ties took a downturn. The biggest casualty of this situation was Turkey’s participation in the F-35 Lightning II, which formally ended in July 2019.

There are concerns that Washington is extending its pull to the T129 sale to Pakistan by blocking the third-party delivery of those engines. However, Demir stated that both Pakistani and Turkish officials were now working to secure those exports, after which, deliveries to Pakistan can proceed.

If they are unable to secure those export permits, Turkey will offer the ATAK to Pakistan with its domestic TS1400 turboshaft engine. Development of the TS1400 began in February 2017, and it is currently slated for induction and serial production by 2025.

However, based on the SSB’s statements, it would seem that if Turkey and/or Pakistan fail to acquire the LHTEC permits from the US, the current T129 deal will be cancelled. Thus, Pakistan would need to re-test the new TS1400-equipped variant before signing onto any new deal.

In other words, Pakistan could re-open its attack helicopter requirements, not only to replace the five-ton T129 but the eight-ton AH-1Z as well. If not for Islamabad and Ankara’s difficulties with Washington, the Pakistan Army would have had 45 new attack helicopters by 2023-2024.

Alternatively, the Pakistan Army could also emulate the Pakistan Air Force (PAF) and, in turn, fund or co-fund an original development project with the aim of securing local production and intellectual property.