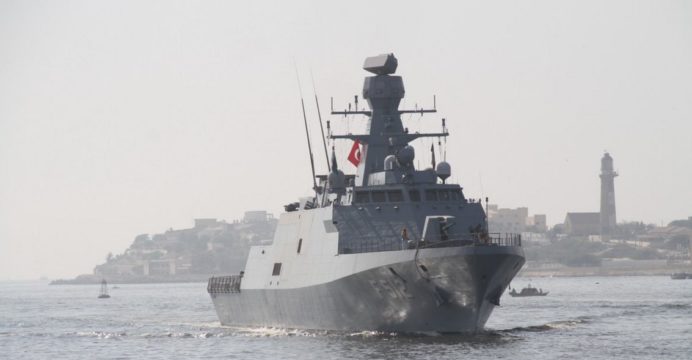 On 14 November 2019, Aselsan revealed that is got a €176.9 m contract from ASFAT A.Ş (Military Factory and Shipyard Management Inc) to supply subsystems for the Pakistan Navy’s four MILGEM (i.e., Jinnah-class) multi-mission corvettes/light frigates (via Anadolu Agency).

Aselsan may be supplying the electronic support measures (ESM), radars (main and/or low probability-of-intercept), sonars, and other subsystems. One of these could be the Aselsan Gökdeniz close-in-weapons-system (CIWS) for low-altitude air defence coverage, especially against incoming missiles.

This is Aselsan’s second large contract involving Pakistan, the first was a $254.73 m US deal in July for the Pakistan Army’s T129 ATAK attack helicopter program.

Pakistan’s Ministry of Defence Production (MoDP) signed a contract with ASFAT A.Ş for the four MILGEMs in July 2018, following two years of negotiations with the Turkish government.

Under the contract, Pakistan’s Karachi Shipyard & Engineering Works (KSEW) will manufacture two of the ships, with the other two being built in Turkey. Pakistan will also receive “complete transfer of technology and the transfer of intellectual property for the design of (the MILGEM).”

In September 2019, Istanbul Shipyard held the steel-cutting ceremony of the PN’s first MILGEM.

During the steel-cutting ceremony, ASFAT A.Ş also revealed an impression of the PN’s MILGEM. As shown in the tweet below (courtesy of Ahmad Ibrahim), Pakistan’s ships will differ from their Turkish equivalents. The most apparent of these changes is the inclusion of a vertical launch system (VLS) at the bow of the ship (behind the main gun) and the use of a CIWS – possibly the Aselsan Gökdeniz.