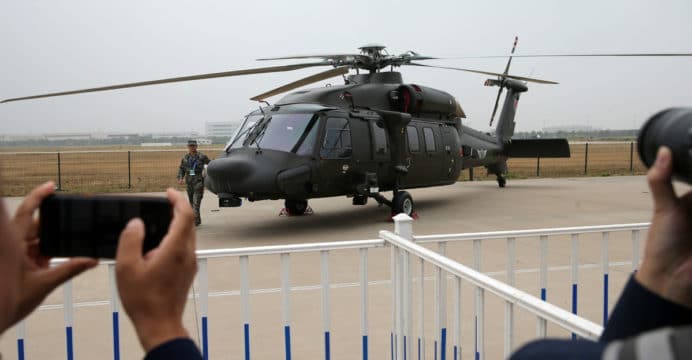 The Z-20 is a twin-engine medium-lift helicopter with a maximum take-off weight (MTOW) similar to that of the S-70i Black Hawk helicopter, i.e., in the 9-11-ton range.

In an interview with the Global Times, Wang Xibao, the chief engineer at Harbin Aircraft Industry Group – i.e., a subsidiary under the Aviation Industry Corporation of China (AVIC) – stated that the Z-20 “uses many technologies that should be considered advanced in the world.”

These include, among others, “active vibration control, fly-by-wire, low-noise design for rotor and high-performance aerodynamic design of the rotor.”

To AVIC’s credit, fly-by-wire is not a common flight control system for helicopters. In fact, Sikorsky is only experimenting fly-by-wire on the UH-60A at this time.

Moreover, the Z-20 is operable in a diverse range of environments, include high-altitude areas with a lack of oxygen. The helicopter’s designers credit this capability to the Z-20’s indigenous turboshaft engines.

In addition to a tactical troop transport and land forces utility, Chinese defence analysts have noted that work may be underway towards a naval variant of the Z-20.

It will be interesting to see how the Z-20 fares in the export market. AVIC would offer prospective buyers a modern platform with analogous technologies and capabilities to Western platforms, such as the S-70i and NH-90, but potentially at a more competitive cost. With a potential scope of replacing hundreds of Z-9 and Mi-8/17 helicopters across each of the PLA’s service arms, the Z-20 will draw on economies-of-scale.

In addition, the introduction of the Z-20 – and certification of its engine – could also give China the basis of a next-generation heavy attack helicopter.